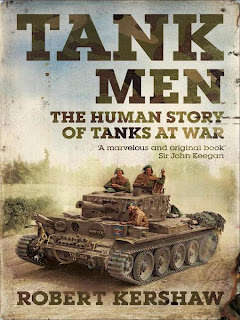 Let me start this review with a warning: Tank Men : The Human Story of Tanks at War is definitely not for the faint hearted. Robert Kershaw has collected together hundreds of veteran stories and connected them in a hard edged narrative that takes the reader from the first tanks of WWI through to the end of the Second World War. By the conclusion of this book there is little doubt that the life of a tank crewman could be uncomfortable, brutal, and above all dangerous.

In the early days of the Tank Corp these great metal boxes were hailed and derided in equal measure. Seen as a war winning weapon, Britain lead the world in tank innovation and design. But in the early days the tank was seen as a temporary weapon with no practical future. Cavalry regiments sternly resisted the move to mechanisation and the High Command (and policy makers of all hues) struggled to decide how best to use this new weapon.

Peter Beals book Death by Design, made it clear that this lack of focus combined with post war budget cuts saw Britain loose its leading edge. Tank design was confused, contradictory, slow paced and misdirected. The result was that when war reached these shores again in 1939 Britain was ill equipped to face the Panzer Divisions of Nazi Germany. This was as much a failure of tactical employment of tanks as it was of the hardware but the results where the same. The armoured box of the tank became the coffin of many a crew on both sides.

May of the veteran accounts collected by Kershaw have the power to shock the reader, even those familiar with other books on tank warfare. This is history told by those that lived it and its a stark and uncompromising window on the horrors and hardships of war. This is the first book I have read in which I felt I understood (at least in part) what it was like to be a crewman. The descriptions of conditions in the desert campaign in North Africa in particular leave the reader in little doubt that man and machine were pushed beyond all reasonable limits and expectations.

One of the things I most liked about this book was the breadth and range of veterans whose stories fill the pages. The majority are former Allied servicemen but there is also a good selection of accounts from the other side in the conflict. Some of these come from letters and diaries but a good number are from interviews with surviving combatants. And it is clear that whichever side you fought on, tank crew in every uniform shared similar hardships and fears, primary amongst these the fear of fire inside the tank.

This is one of those stand-out books that deserve to be seen on the shelves of anyone interested in armoured warfare.