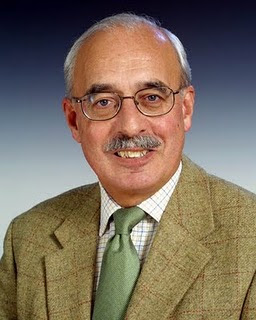 I've just learned that Professor Richard Holmes passed away on the 30th April at the young age of just 65. In my view he was one of the best military historian's of recent times, not just for his undoubted scholarly work but also the fact he was so very good at communicating his enthusiasm to an audience either on TV or in person.

He enlisted in the Territorial Army in 1964, rising to the rank of Brigadier with the 5th (Volunteer) Battalion, The Queen's Regiment. Between 1969 and 1985, he lecturered at the Department of War Studies, Sandhurst.  He later took command of the 2nd Battalion, The Wessex Regiment rising to the rank of  Lieutenant-Colonel. In 1988 he was appointed Officer of the Order of the British Empire (OBE). He was appointed Aide-de-Camp to the Queen in 1991 and in 1995, he became Professor of Military and Security Studies at Cranfield University. From 1997 until his retirement in 2000, Holmes was Director Reserve Forces and Cadets. In 1998 he was promoted to Commander of the Order of the British Empire (CBE).

Professor Holmes was also closely associated with Project Hougoumont the heritage restoration scheme to save and preserve Hougoumont Farm on the site of the 1815 Battlefield of Waterloo in Belgium.
﻿

﻿He was most well known for his Books and associated TV series such as Wellington: The Iron Duke (2002) Tommy: The British Soldier on the Western Front (2004) and Sahib: The British Soldier in India 1750-1914 (2005) to name but a few.
I was very privileged to meet Professor Holmes about 6 years ago during his lecture tour to promote his then new book, In the Footsteps of Churchill (Published in 2005). The 90 minute lecture he delivered was conducted without notes yet was fluid, informative and presented with humor and great enthusiasm. Afterwards I got my copy of his book signed, shook his hand and exchanged a few words. Despite the brief meeting he came across as completely unassuming, genuinely friendly and pleased to meet fellow history enthusiasts.
Posted by BigLee at 12:38