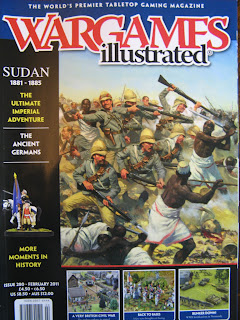 Saturday morning and I heard the gentle plop of the post hitting the doormat. My copy of Wargames Illustrated had arrived and I had a clear afternoon to sit down and read through it for a change. This months theme is the Sudan 1881-1885 and the Mahdist uprising of 84-85. This is one of those periods that I know little about beyond what I 'learned' from classic films like the 1939 version of  The Four Feathers staring Ralph Richardson and John Clements or the 1966 film Khartoum staring Charlton Heston. (i.e. Not a lot at all!)

More Moments in History - Battlefront are expanding their range of historical vignettes with three new sets including Washington & the Continental Army Standard; Conference at Yalta; Black Hawk Down; and The Death of Nelson. I've not collected any of these yet but I have to say I am tempted. I resisted last year because I was focusing on only buying miniatures to game with but I may treat myself to a set to paint for display.
Give Them Volleys! - A good overview of the situation that lead the British into the Sudan in 1883-5 and background to the events that lead to the death of General Gordon at Khartoum in January 1885.
Bunker Down - An interesting look at the use of Fortifications in Flames of War, focusing on the Atlantic Wall defences facing the Allied invasion of Normandy in 1944. This follows on from last months Theme and provides some interesting ideas and tactical suggestions for using fortifications in FoW.
Circling the Square - Continuing this months Theme this article looks at the Campaign to save General Gordon and the Battle of Abu Klea on 17th January 1885. Contains some stunning examples of the new Perry Range of figures for the Sudan Wars.
The Tribes of Germania - Changing period dramatically this article looks at the long and protracted struggle of the German Tribes to resist Roman conquest.
A Good Dusting -An article by David Bickley on writing rules to wargame the Sudan War of 1883.
Back to Bases - An interesting article that discusses alternative ways of basing figures for gaming.
Unfinished Business - The last of the Theme articles in this issue looks at what happened after the death of General Gordon. In particular this article looks at the weapons and tactics of both sides and provides details for re fighting the Battle of Tofrek.
Second to None - Another follow up from last months theme this article looks at the US 2nd Infantry Division in northern France in 1944.
Fall in! 2010 - A Pictorial review of the HMGS East Convention.
Research and Imagination - An interesting article looking at the alternative history that is A Very British Civil War. This 'period' is proving very popular and has resulted in a wide range of miniatures from several manufacturers.
Mapping out the Peninsular War - A review of a new body of research that has been published as The Peninsular War Atlas by Colonel Nick Lipscombe.

As always a well put together issue and an enjoyable read with plenty of beautiful photographs and illustrations.
Posted by BigLee at 09:01