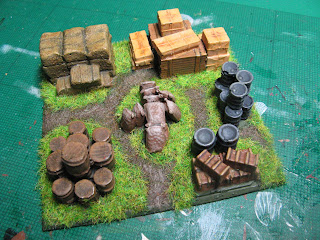 I'm still working on the new Sherman Platoon but in between I've also been making some Objective Markers. This Supply Depot consists of several smaller scenery items by Ironclad Miniatures. I bought some of these at SELWG in 2009 and decided to buy some more because I liked them so much. The result is this model consisting of six of the resin models on a single large base.

The only problem with this model is that no sooner had I finished it than I realised I may have based it wrongly. I checked the rulebook and sure enough... "Objectives are modelled on a standard large base - 65mm wide by 50mm deep." (Pg 195 of the FoW Rulebook).

In a word, b**ger! Serves me right for letting my enthusiasm get the better of me and not preparing enough before I started work. I can still use this as a terrain feature in the game but I'll pick up a few large bases for future objective markers.
Posted by BigLee at 09:01