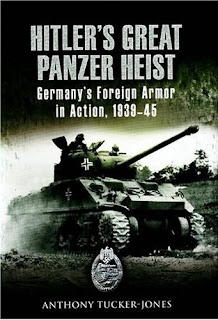 I've just finished reading Hitler's Great Panzer Heist: Germany's Foreign Armor in Action, 1939-45 by Anthony Tucker-Jones. This is a fascinating book and opened my eyes to the scale of the victory Hitler gained when he occupied Czechoslovakia. Not only did Nazi Germany acquire a launching point for its later assault on Poland but it also acquired one of the largest arms industries in Europe. By the time Hitler's armies had taken control of the rest of Europe up to 25% of the Wehrmacht's panzer's were of foreign origin.

Over 10,000 British, Czech, French, Italian, Polish and Soviet tanks and other armoured fighting vehicles were turned on their former owners and bolstered the armed forces of the Wehrmacht. Of course capturing and reusing enemy vehicles was carried out my all sides in the war but by far the largest benefactor of such gains was the German war machine.

Further more the heavy industry of those nations occupied or allied to Nazi Germany continued to produce vehicles and munitions for their new masters. Tanks, self-propelled guns, assault guns, armoured cars, personnel carriers all were reused by the German army and her allies throughout the conflict right up until the bitter end. In additional all the major European vehicle manufacturers produced new tanks, transport and artillery for the Germans at some point during the war.

This is a very well researched book and sheds light on an overlooked aspect of history.