On Monday I visited Audley End House, an English Heritage property near Saffron Walden in Essex. It was a family day out and I was studiously avoiding anything associated with Militaria or Games as I'm probably wearing my wife's patience thin (She's very understanding but I have dragged her to several events recently). However it wasn't to be. 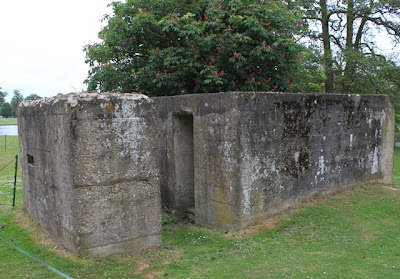 In the grounds to the house I spied an ugly concrete structure that I suspected was a WWII Pillbox. There were also some rather suspect looking concrete blocks next to bridges in the grounds which I suspected were the remains of gate posts. It turns out that the house was indeed used by the Military during the second world war and the site was given some rudimentary defences in the form of guard posts, pillboxes etc which have survived to this day.

"Audley End was offered to the government during the Dunkirk evacuation but the offer was declined due to the lack of facilities at the house. It was later requisitioned in March 1941. It was initially used as a camp by a small number of units before being turned over to the Special Operations Executive.

The SOE initially used the house as a general holding camp before using it for the Polish branch of the SOE. A memorial to the 108 Poles who died in the service stands in the main drive." (Source : Wikipedia)

The story of the mansion's wartime employment has been compiled in the book "Station 43: Audley End House and SOE's Polish Section" by Ian Valentine (Sutton Publishing Company, 2004). Between 1941 & 1945 SOE trained 527 agents at Audley End for missions in Nazi occupied Poland. The 108 Poles who perished on their missions are commemorated in a small memorial on the main drive of the house.