No, I haven't started painting cute garden animals for a fantasy game (relax Ray!). I'm talking about the Czech Hedgehog variety that often littered the beaches and fields of Normandy.  I'm always on the lookout for small battlefield items that can 'decorate' my games tables and this was a case of desire meeting serendipity in a most satisfying way. 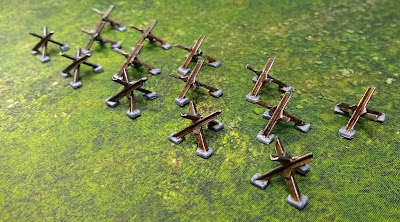 I bought a pack of white metal Czeck Hedgehogs on eBay a few years ago (made by Battlefront) for a model project I was doing and only used one of the 15 that came in the pack. I then promptly forgot all about the leftovers and they were 'lost' in my lead pile for a few years. I had a bit of a tidy-up in my room last week and was rather pleased when I rediscovered the remaining metal pieces. "Hmmm" I thought, "I can make use of these" and quickly glued them together for use with my 15mm Normandy games.

Incidentally, I used a dab of epoxy resin rather than superglue to bind these because the 'join' probably wouldn't survive handling on the table. Epoxy is a tricky glue to use because you have to mix it and it can be a bit stringy and messy, but the bond is much better and longer-lasting than cyanoacrylate glues. 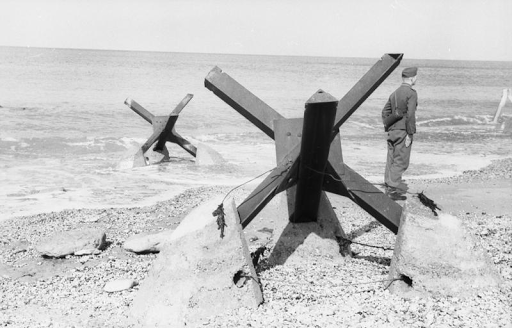 The Czech Hedgehog gets its name from Czechoslovakia where it was first used on the border with Germany.  Many of these were concrete and not very effective but the basic shape could be made from metal or even from railway sleepers. They were rendered largely useless by the annexation of the Sudetenland but the design was cheap and easy to make and proved an effective roadblock. Towards the end of the war the larger tanks could push or crush the metal hedgehogs but they remained useful against wheeled vehicles and were extensively used by the Germans and Soviets in WWII.

I briefly thought about basing these up but in the end, decided they would be more useful without a base. This way I can place these on beaches, in fields, or across roads where they can limit vehicle access or provide cover for infantry.

In case you are interested, here's the other hedgehog that I used on a scenic base for the Analogue Hobbies Painting Challenge back in February 2019. I knew I wanted a hedgehog on the base and briefly considered making something myself but realized my skills were insufficient! So I did what any self-respecting (and slightly obsessed) wargamer would do, I scoured the internet for what I wanted. Several weeks of hunting and a single pack went up for sale on Ebay and I snapped it up. So much of our hobby is serendipity and this was a perfect example.
Posted by BigLee at 12:00