Week Six of the Painting Challenge and we are almost at the halfway mark. My painting output has slowed a little because I have diverted some time to prepare a couple of Solo games for the coming weeks. The rules I am using required a bit of tweaking for the game I want to play (top-secret for the time being!) and I needed to relabel some bases to match the historical units...all time consuming but enjoyable work that has distracted me from the painting table. Another reason for the reduced painting is that I have ordered some resin terrain and 3D printed models and was still waiting for them to arrive. The Terrain has now been delivered and I have started work on it, and if the models arrive I should have the whole thing completed by next week. Fingers crossed!

I bought this model three years ago and its been looking at me accusingly ever since. At first glance, he looked quite simple to paint but as I worked on him I found all sorts of little details that demanded to be painted, such as a tiny gold ring in his lip or the various charms and amulets hanging from his belt. I went for a deliberately dark theme as it seems appropriate and matches the dark look in his eyes... I certainly wouldn't want to encounter him while exploring the ruins of Felstead. 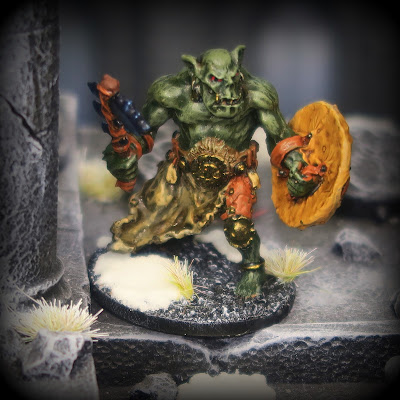 The model is mostly cast in a yellow resin that must be unique to this manufacturer. The axe hand and shield hand (and their contents) are cast in metal. Combining the parts was trickier than I had hoped, not because they were ill-fitting but simply because they needed to be pinned and supported while the Epoxy I used to join the set. Then both of the legs broke at the ankle! This required yet more pinning and repair work before I could even prime the figure. The sculpting is wonderful, but the choice of material lets this particular figure down. 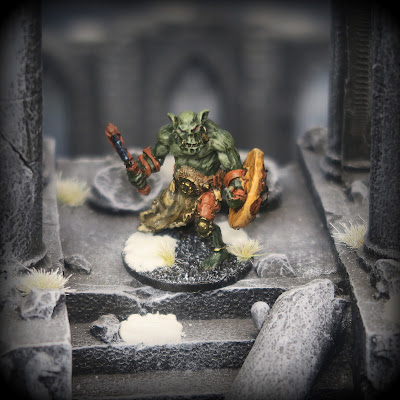 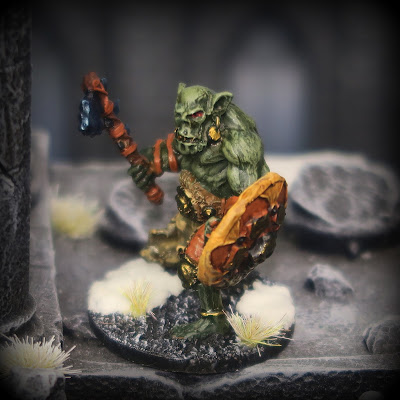 Standing at 35mm tall this guy is very imposing and will make a significant presence on the games table. The implied threat in his expression will also leave little to the imagination for any that face him!

Paint something religious said the brief, so I rummaged through my lead mountain and ended up buying two figures from Ebay instead. But the postal service being what it is (or more specifically Royal Mail being what it is) the models still hadn't arrived when it came time to start on this chamber. So I had another rummage in the lead mountain and found this guy/thing. "He looks fairly religious" I thought, so I give you a cult priest raising the dead. 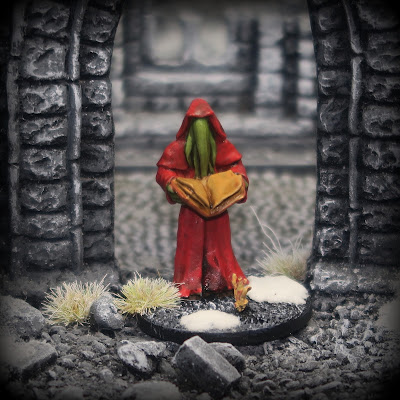 The not so sharped eyed will notice that the pages of the book are completely blank. Somehow I managed to overlook that until right now when adding the pictures to this post! I'm going to plead tiredness and the fact I allowed myself to be sidetracked by work projects (something I never normally do). I guess it is one of the hazards of working from home... those lines between work and home life become very blurred. I will add a few arcane letters and symbols at a later date. 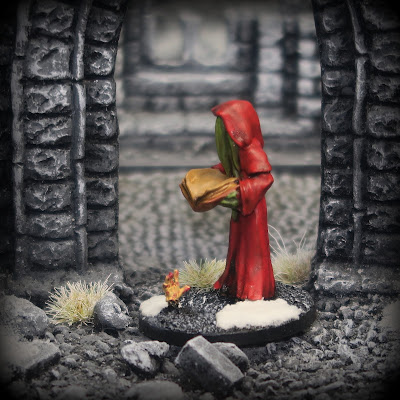 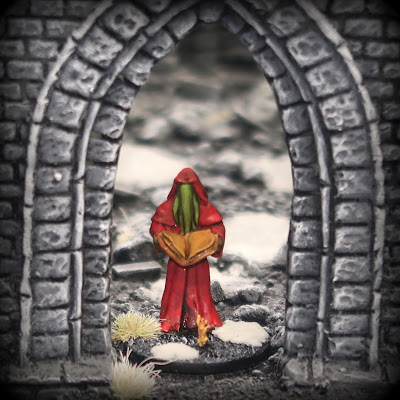 The model is from Grenadier I think, although I'd happily be corrected if I'm wrong. The tab on the base had been filed flat and this is usually where the manufacturer and date are located. I decided to go with a simple but bold red and green colour scheme and I'm happy with the result.
While progress has been a bit limited this week, points-wise, it was bang on the money so I am still on target for the end of the Challenge. More importantly, I am enjoying myself with this rather leisurely pace compared to the self-imposed workload of earlier years. It's meant I have been able to take time out to plays some solo games as well as maintain my video posting schedule on my YouTube channel, The Quarantined Wargamer. 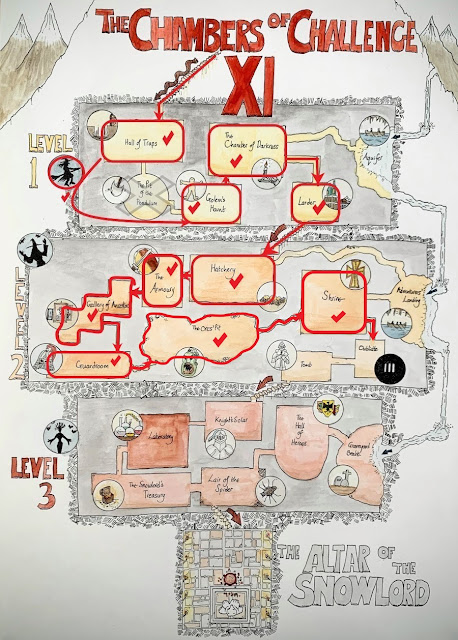 Hopefully next week I'll have a bit more to show off but in the meantime its time I got my feet muddy on my next painting project...
Posted by BigLee at 12:00