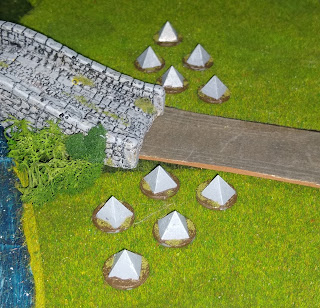 I was supposed to have a Panzer finished for today but I got a little bit sidetracked because a very nice parcel arrived a couple of days ago. I ordered some scenery items from Peter Pig and they turned up quicker than expected, including these rather nice dragons' teeth. I don't know why, but I had it in my head these were going to be hollow, but they're not. A very nice, solid and quite sharp set of teeth, so I'll have to make sure I don't drop them on the floor. These babies will make stepping on LEGO look positively comfy.

Dragons Teeth (or Drachenzähne in German) are a form of static defence that was first deployed in WWII. Their purpose is to restrict the movement of tanks and sometimes (as in the Seigfried Line) funnel those vehicles into preprepared killing zones. Along the Atlantic Wall, they were often used in conjunction with landmines, anti-tank walls and ditches. Although they look like they are individual concrete blocks they were often laid as part of buried concrete 'mats' so they couldn't just be bulldozed out of the way. There were also some 'mobile' versions that could be moved and this sort of obstacle wasn't exclusively pyramidal in shape, although these are the most common. This type was typically 3-4ft tall, enough to ground any tracked vehicle that tried to cross them. 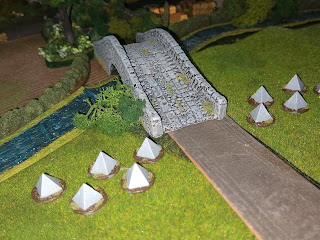 Like other concrete defences from this period, many survive to this day, simply because their removal is too expensive or complicated but also because there are so many of them. Variations on this design were - and still are - a common sight in the south of England. Most were constructed in the summer of 1940 when an invasion was a very real threat. They were used to restrict access to strategic points such as checkpoints, railway junctions and bridges. They are still a common sight around railway embankments and along the south coast, particularly around potential landing grounds. Indeed there are some only mile or so from where I live, along the embankment of a busy rail link into London. These are large pyramidal blocks with flat tops but in other areas of the country there are conical versions sometimes referred to as 'pimples'. Whatever the design, they all serve the same purpose, restricting the movement of vehicles, but in particular tracked vehicles.

This set comes with ten individual teeth and I deliberately kept the bases 'muddy' so they would blend in if I used them with my existing country roads or in the fields either side. Having now taken some pictures I think I'll add some grass to half of them so I can mix and match depending on what terrain I use them.