This week I have a couple of Armoured Cars for my WWII Normandy games using Chain of Command. Both models were purchased from Skytrex and will compliment my existing forces nicely. The castings on these are pretty good and there was very little flash to be removed (more on the angular surfaces of the 222 than on the M20). I have left specific unit markings off these vehicles but included things like national symbols, number plates and names. 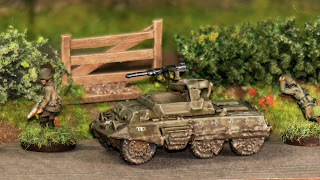 The M20 Armored Utility Car, was a companion vehicle to the M8 Greyhound and was mechanically identical apart from the fact that the Greyhound had a turret while the M20 had a box-like open-topped superstructure and a ring mounting for a 0.50-in machine gun. The vehicle was designed by Ford with a prototype being build in 1942. This was a six-wheeled, six-wheel-drive vehicle with a rear-mounted 110hp six-cylinder engine.
Over eight and a half thousand M8's were produced with 3791 M20's entering service and built by Ford during its two-year production run between 1943 and 1944. It had a top speed of 55mph and its 56-gallon fuel tank gave it an operational range of 350 miles. Inside it had bench seats for four soldiers with space for weapons and ammunition, although it was often used as a command and control vehicle rather than for troop transport.
Both versions of this vehicle had excellent cross country capabilities but are described as difficult to reverse and vulnerable to mines due to its thin floor armour. None the less it was an excellent reconnaissance vehicle because of its speed and modest weight which meant it could cross even the weakest of bridges. 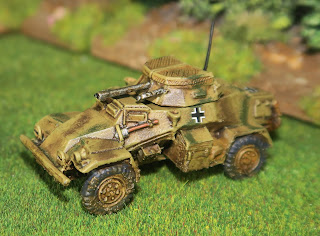 Next, we have the Sdkfz 222 or Leichter Panzerspähwagen. Built between 1935 and 1944 this machine had a long life for an active service vehicle. The 222 is actually the second of two armoured cars designated as Light Reconnesance vehicles. The earlier 221 has a slightly shorter wheelbase and while if performed well on roads its cross country ability left a lot to be desired. The 222 was built from scratch so had little mechanical relationship to the earlier vehicle. Because it was longer the chassis had to be strengthed both to accommodate the additional weight of armour but also the fact it carried heavier weapons than its predecessor.
The Rear-mounted petrol engine could run on a variety of grades of fuel and later versions could achieve 50mph road speeds with an operational range of about 300 miles. It was armed with a 2cm KwK 30 L/55 autocannon and (from 1938) Maschinengewehr 34 machine gun. In 1942 the KwK 30 was replaced by the faster firing KwK 38 of the same calibre giving it more punch. 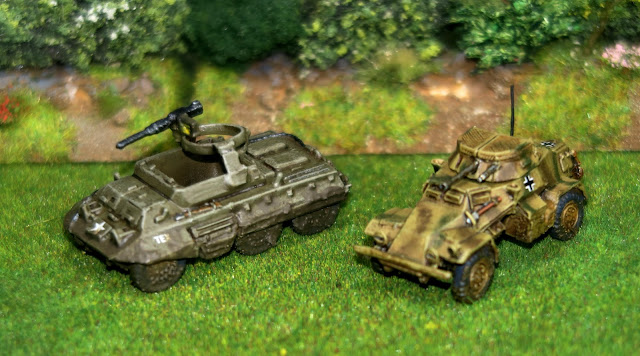 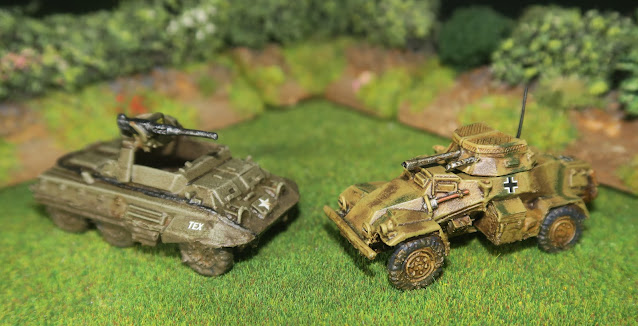 I have some more vehicles to work on over the next few days, again purchases from Skytrex and suitable for use with my 15mm Chain of Command forces.
Posted by BigLee at 12:00