Spanish Cavalry in the Army of Hannibal

Having completed my Classical Indian army I thought I'd revisit one of my existing 6mm collections. I've been giving some thought to enhancing the cavalry forces that formed part of Hannibal's army in the 2nd Punic War. It soon became clear that there was a gap in my army list that needed to be filled in the shape of some Spanish Cavalry. Various estimates suggest that after Hannibal descended the Alps into Italy he had about 6000 cavalry in his army, approximately 2000 of which were Spanish. These troops, along with about 8000 infantry, would have been recruited from areas directly under the control of the Barcids in their territories in the Iberian Peninsular. 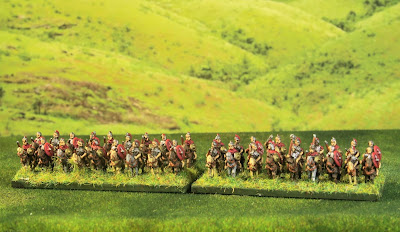 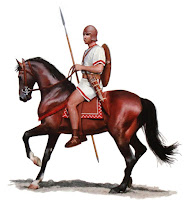 Despite being sometimes described as Heavy Cavalry they were typically fairly lightly armoured, similar to the infantry. The standard 'uniform' for the Spanish was a white tunic sometimes trimmed with red cloth. Most infantry wore sinew caps but these were gradually replaced by bronze Montefortino (conical helmets with cheek plates and neck guards) either taken from defeated Romans or forged by their own blacksmiths. All troops, foot and mounted, were armed with javelins or spears and the curved Falcata sword. Small round shields called caetra completed their equipment.

Polybius does describe some Spanish Cavalry being used as shock troops. These wore scale cuirasses and carried the larger oval Scutum shield and a single long thrusting spear. 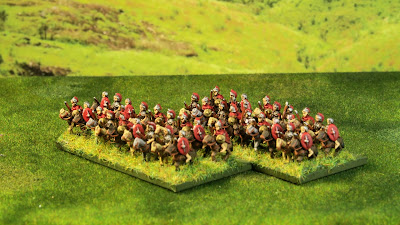 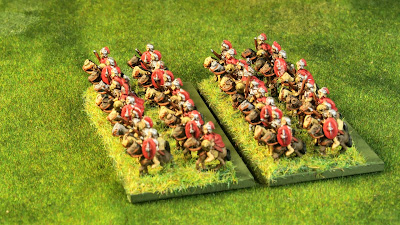 I have also read about extra men being carried on the horse, who would then dismount and fight on foot. I'm not sure if this sounds like a viable tactic as surely the newly deposited foot troops would be outnumbered by any infantry they engaged and would have run the risk of being trampled by their own cavalry. I'll have to read a bit more about this, although at the moment there are no rules that I am aware of in To the Strongest that would replicate this tactic.

Incidentally, my main reference source for this article is as always the excellent Armies of the Macedonian and Punic Wars by Duncan Head. I bought this some time ago and it cost a pretty penny but has been an invaluable reference source ever since. I constantly find myself diving into its pages for detailed information and is always a good place to start before widening the search for information.
Posted by BigLee at 12:00