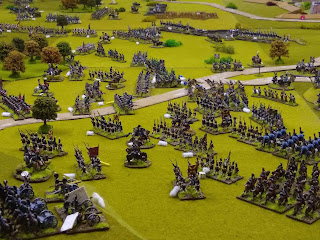 Postie ran a Peninsular War game yesterday but for various reasons, it was a bit of a bust. The UK was battered by Storm Ciara yesterday and several Rejects wisely decided not to travel in the 80mph winds. I, on the other hand, decided nothing was keeping me from a game, not even the flying debris and driving rain of an extratropical cyclone! The Shed-o-War was rocking and shuddering in the gusts, and there were a few leaks in the roof, but at least it stayed on and we were able to complete our game, albeit to an unsatisfactory conclusion.

With just three players rather than the planned six this was already shaping up to be a busy game with lots of figures to move and multiple decision to make. Unfortunately for myself and Ray playing the British/Portuguese army, the game was effectively decided in the first 30 minutes of play.

Setup
Stuart based this game on an actual siege, however historically Wellesley decided not to attempt to relieve the town of Almeida, hoping that they could hold out long enough to keep the French tied down while he reorganised his forces. The siege, however, came to a very dramatic ending when a mortar shell hit the town's powder store. The resulting explosion flattened nearly every building, killing hundreds and precipitating the surrender of the garrison.

In this what-if scenario, the British are trying to break the siege however, with hindsight, it was clear that in this case, Wellesly was probably right not to attack. The longer the game went on the weaker our army became and Surjits forces were all the time marching to concentrate on our assault. Certainly, had we been allowed to set up our forces I think we would have deployed very differently. As it was our opening disposition forced ceratin actions on us that, compounded with brilliant dice rolls from Sujit, meant we were fighting a losing battle almost from the start.

Orders of Battle
Rather than struggle with Posties handwriting (he's so old-school he doesn't even own a mobile phone, let alone a computer), I decided to just post the pictures I took of his Orders of Battle sheets. Good luck reading them! 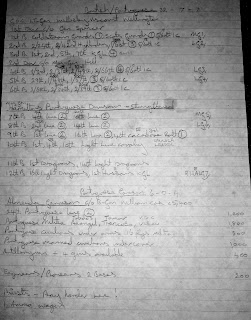 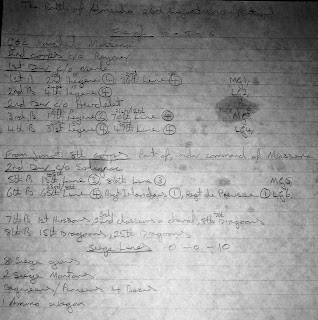 
Analysis
I could waffle on an on here, but I think Ray and I felt like we were beaten by the scenario and the deployment as much by Surjits cool head. It was an unmitigated disaster for the Britsh and probably confirmed that Wellesly was right after all not to attempt to break the siege.
Posted by BigLee at 17:15