It's not gone unnoticed, but this wargamer is getting smaller. I'm not talking about the inevitable height shrinkage that comes with old age (not quite there yet!) but my 'horizontal' footprint is diminishing and has been for several months now. Back in April, I turned fifty and I was diagnosed with Hypertension and in my GP's usual offhand way I was advised to lose weight. I've been here many times before but I had never been as heavy as I was at that time (I was starting to develop my own gravitational field) so I knew I had to make a real change to my diet. The problem is that after a lifetime of diets I think anything actually labelled a 'diet' is by its very nature, doomed to failure. At some point, the diet comes to an end and the weight inevitably piles back on. I imagine that the vast majority of people that have struggled with their weight like I have will recognise the phenomenon only too well. 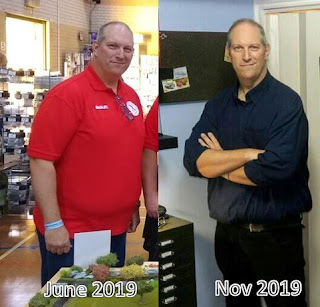 This time I can't let it happen again, not if I want to keep mobile (my knees complain VERY loudly these days). Let's face it, I'm far too young to have mobility problems especially if I want to continue to enjoy my hobby and all its associated activities. Standing for long periods during games, walking around wargame shows or exploring museums or historic sites had become increasingly painful and the Salute show earlier this year was a watershed moment for me. I could honestly see a point in the not too distant future when I would be forced to abandon an event because of the pain in my legs. I'll probably need a knee replacement at some point in the future (the damage has been done) but in the meantime, at the very least, I can take some of the tonnage off the joints to ease the pain.

I'm pleased to say that I have lost the best part of six stone (38 kilos) and am closing in on my first target weight. I still have a way to go, but I'm confident I can do it because I have a new regime that can best be described as a non-diet diet. One of my key objectives, when I started this process in April, was to lose weight without becoming obsessed with hard and fast rules. I didn't want to count calories or ban particular foods or even increase my exercise all that much. In short, I wanted to make changes that would produce results without having to think about it. This sounds like the holy grail of diets but I think I have done it and the results so far seem to confirm that. So how the hell have I done it?

In short, I have cut out a lot of the bread I used to eat. I have switched to oats and fruit for breakfast instead of toast and of course, I have largely cut out cakes and sweets. Within a few weeks, I found that I didn't miss the latter and learning to say 'no' has been one of the big successes of this effort. The main change I have made is that I have given myself permission to break the diet occasionally. I can still enjoy a blow-out takeaway or a fancy meal out now and again, so long as I don't follow up by falling off the wagon entirely. It helps that I have always enjoyed plenty of vegetables and fruit in my diet, and while I'll NEVER be a vegetarian, I'm not weeping myself to sleep for want of a steak! I'm also not much of a drinker so I don't have to reduce my alcohol intake to cut calories. So in some ways my diet was already on the right track, I just needed to cut out all the extra stuff I was eating. And that's it; no fad foods, no medical supplements and certainly no surgery!

What about exercise I hear you say. Well, to be honest, I'm not a 'sporty person' and never have been. Most physical activities I could do would be too high impact on my dodgy knees, I refuse to waste money at a Gym and I hate swimming (unless it's on holiday in the Med!). I have been walking more, mainly because my legs hurt less and I don't have so much tonnage to drag around, so I guess I have increased my activity but its a chicken and the egg scenario.

So there you have it, my solution to a lifetime of indulgence. Hopefully, by the time Salute 2020 comes around, I'll be a shadow of my former self and bounding around the excel exhibition centre like a spring chicken. You have full permission to bully me if I don't keep up the good work. Seriously, keep me honest, keep me on track and in return, I'll stay around dishing out easy victories for my opponents in the wargames scene for years to come!
Posted by BigLee at 12:35