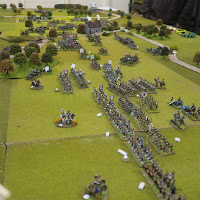 Reject HQ had a visit on Sunday from one of our lost sheep, Dave, who moved away a couple of years ago (maybe we should have taken the hint?!?). We had six players around the table for this game, more than we have had in quite a long time. Postie put on a large Napoleonic game and had a lot of figures down on the table for this battle so we were set for what would prove to be an epic struggle.

The Setup
This is a fictional encounter set just before the Battle of Leipzig, so Postie drew up our orders of battle form the units that would have been in this area at this time period. The armies facing each other were ostensibly Swedes versus Poles, but in reality, these are international armies with troops from half a dozen nations represented on the table.

As usual, Postie set up the deployment but there was enough room for some finesse in the movement of our armies before we met in melee. We pulled sides from a hat as normal and for my sins, I found myself commander of the Swedes.

Rather than struggle with Posties handwriting as I usually do, I decided to post pictures of his OOB's. My clumsy attempts to transcribe the lists usually only serve to highlight my ignorance of the period!

The Army of Crown Prince Charles John of Sweden 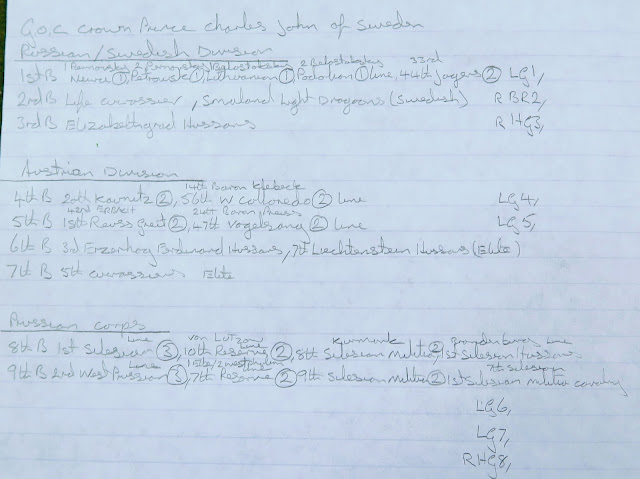 The Army of Prince Poniatowski of Poland 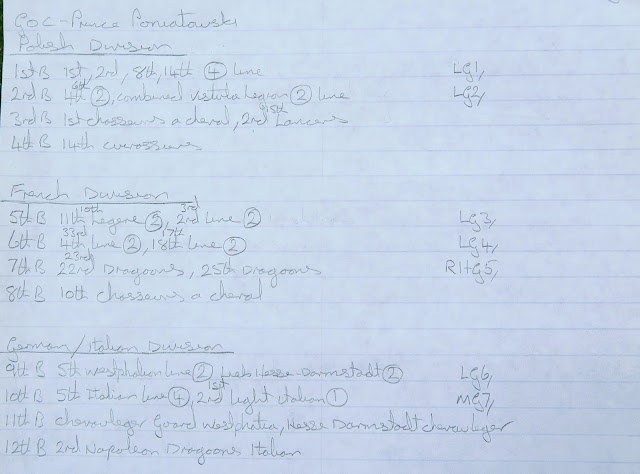 We called the game at this point. There seemed little point fighting on as my centre pretty much dissolved, and entirely my own fault. What can I say, I'm a shit wargamer! Postie added up the points (to rub salt in the wounds). The Polish Army ended on 24 points with the Swedes on just 10. Richard did very well to recover after the disastrous Brigade check early in the game and Dave still had a viable force on our left flank, but without a centre to connect them, the battle was lost. Sorry lads, my bad!

The only good side to this game was the good-natured banter that crisscrossed the table. The neighbours were probably wondering why there was so much laughter emanating from the shed but the answer is simple, we were enjoying the game and each others company, and at the end of the day that's all that counts.

My tally of defeats this year is fast becoming legendary. In fact, looking at my records I am now just one defeat away from a record low. I have another game planned in December so maybe I should pull out now and not tempt fate?!
Posted by BigLee at 20:41