Roadtrip to Warfare in Reading 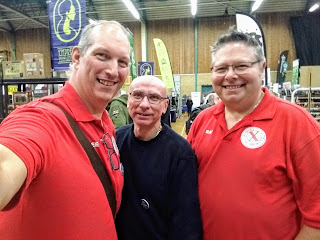 I have to admit that I have a limited range of shows that I attend regularly and often lament that I miss some of those a bit further afield. Having missed SELWG in October I was determined to get a hobby fix at another event before the end of the year, and Warfare in Reading seemed like the perfect candidate. I've never been to this show before, although Ray and Postie have over a decade ago, so we hatched a plan to attend the show on Saturday. I pick up the lads at some ungodly time of the morning and then we set off around the M25 towards Berkshire. Despite it being a 5 hour round trip (for me at least) it was worth the effort and we all had a great day and agreed we should do this show again.

As usual, I took a load of pictures but this time I had to rely on my phone camera as I had forgotten to charge the batteries in my main camera. On the whole, this worked out fine and there were only a few instances where I missed having a decent zoom facility. Here's a selection of the better pictures from our day.

Finally, at 11am sharp, the trade hall opened and the main reason we were here was able to commence.

With our initial retail therapy needs satisfied we nipped off for a spot of lunch (awful...don't bother with the cafe in the sports centre, overpriced and not very nice). Then we went and had a proper look at the demo tables in the adjacent hall. As previously mentioned two-thirds of the hall was dedicated to competition games and the remaining third, while a little cramped, had some very good looking games on display. I have to say that my usual bugbear - unlabeled tables and a lack of engagement from some of the clubs running games - did rear its ugly head again, but fortunately, this wasn't the norm. Where I was able to label the pictures correctly I have included it below.

There were a few more demo/participation tables but either through bad timing or lack of attention they didn't get photographed. Some were between sessions for the participation games and there wasn't anything to see and photograph. I meant to catch them later but for some reason still missed them in the tick of the game. There were also a couple where none of the club members playing the game even seemed to notice that someone was watching their game. Without any table signage telling me what was being played I left them to it and hence no pictures. Personally, I can't see the point in running a demo only to ignore visitors.

All in all a very successful and enjoyable day out, despite the five hours I spent driving there and back! I am lead to understand - but don't quote me - that this location (Rivermead Leisure Centre) is being redeveloped and that next year Warfare will be at Ascot. Wherever it is, I expect the Rejects will be there and maybe we have just added Warfare to our annual list of not to be missed shows.
Posted by BigLee at 09:31