The sports hall filled up quickly and stayed busy most of the day; the company was friendly with wargame regulars rubbing shoulders with families who popped in having been to the pool next door; the club demo games covered a wide range of periods and were generally of a high calibre. This could describe every Broadside Wargames Show we have attended over the years and Sunday's event was equally good as any we have been too before. A small but very friendly show with great games and a good selection of traders. 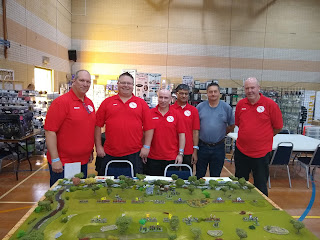 Posties Rejects have sort of adopted this as our 'local show' and put on a demo here every year. This time it was Ray's turn to devise a game and we were able to have two goes at his recreation of the Battle of Killiecrankie. Not only did we put on our annual demo game but this year saw us 'rebranded' with new Red polo shirts. Black seems to be the colour of preference for the majority of people attending these shows and we sort of merged into the background with our old black polo shirts. Now there is no denying we stand out!

Running a demo can best be described as exhausting fun, and we were all shattered by the end of the day. We had gathered at Posties at 7am to load up the cars and were at the venue by the time the doors opened to exhibitors about 8am. Once we had set up we all had a brief chance to look around the traders and club games before we started on our demo. Interest seemed to be high and we had several detailed conversations with experienced gamers interested in the period we were playing or the rules we used. We also had several family groups pass by and the kids seemed to enjoy the colourful figures we had on display.

There was a good selection of traders at the show this year but we were so busy with our game that we didn't really get a proper look around. I still managed to get a good book on the campaigns of Alexander the great and some modelling supplies, as well as another T-Shirt from Art of War. I also didn't get much time to look at the other games but did snatch five minutes to whiz around and snap a few pictures. 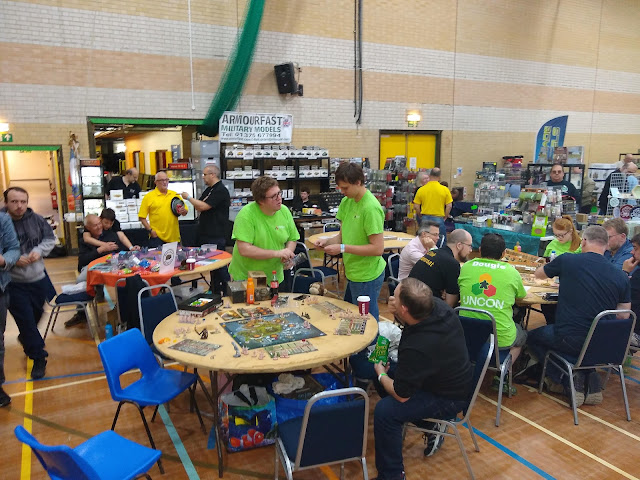 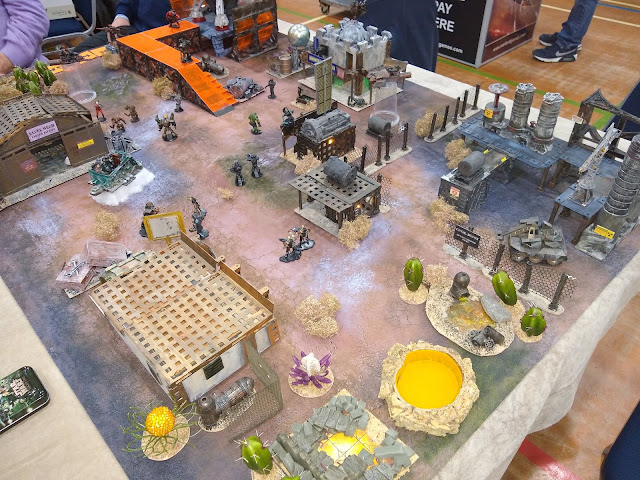 I didn't get much time to wander and join in, but that's only because we were so busy with our game. As always we had a great time and thoroughly enjoyed running a demo game and meeting so many nice people. We were all exhausted by the time we got back to Posties and unpacked. We had a quick cuppa and a post-show chat then I decided to hit the road home. Unfortunately, instead of my usual, 35-minute drive took over two hours due to an accident in one of the Dartfort tunnels, so by the time I got home I just slumped on the sofa, utterly spent. Still, there's worse ways to spend a Sunday.
Posted by BigLee at 15:52