The Challenge is over and I have that empty feeling that follows the hectic activity of the last three months. There is a void in my life and the only thing that will fill it is to start planning for Challenge Ten! But first I need to cap off this year's festival of painting with a 'Body of Work' photo. Its been mixed bag from me this year, with additions to several existing armies rather than starting a new project. My original target of 600 points was smashed fairly early and everything on my original to-do list has been completed. 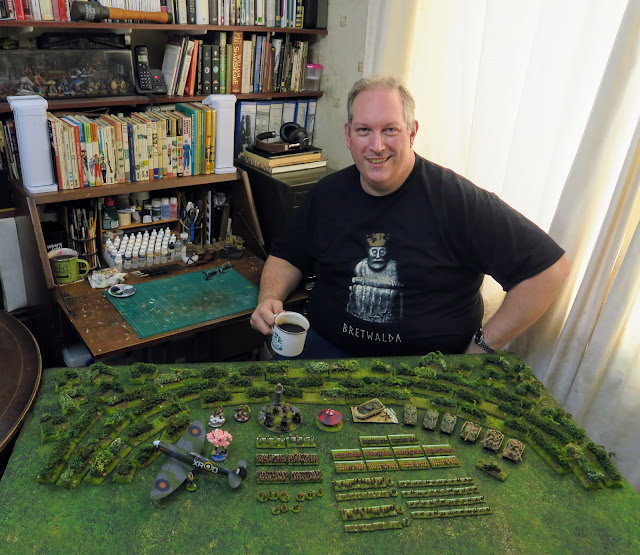 So, I think a breakdown is required although I am aware that I'm probably the only one that will be interested in this. I racked up a total score of 845 Points and reached 31st place. Neither of these figures is a personal best, but considering I was also the Tuesday Minion, I'm pretty happy with that tally. I even managed to take a week off for a family holiday in the middle of the Challenge (as I keep reminding the wife whenever she rolls her eyes at my latest project).

Stats aside, and on a personal level, this has been the best Challenge I have taken part in. I have managed to get a lot of lead painted - far more than I would 'alone' - and have added to several existing armies in my collection. There is always more that can be done so don't be surprised if more AZW units turn up in Challenge Ten.

Aside from the obvious joy of getting stuff painted, I have also been able to participate (in a small way) to the competition itself and that has been enormous fun. Being a minion was both a rare privilege and great responsibility and it has given me a whole new perspective on a competition I thought I knew well. I've said it before but I'd like to thank all of the Tuesday Terrors for being such a great team and for letting me adjudicate their incredible entries. And while I'm in 'Oscars' mode, I'd also like to thank Curt, the Great Snow Lord himself, for running this madness every year. It is the highlight of my hobby year and the other nine months are a pale shadow by comparison.
Posted by BigLee at 13:07