I nearly finished these tanks last week but in the end, I cleaned and re-primed them and started again...let me explain the madness. I decided to give these vehicles a different colour scheme, opting for something called Ambush Camouflage. This is a hard-edged camo that started to appear on German tanks in August 1944. It consisted of the usual Green and Red/Brown stripes over Dunkelgelb with dots of opposing colours over the top. A bit complex, but considering I don't have an airbrush I thought it would be a good alternative to my previous attempts at soft-edge camo. Initially, I was reasonably happy with it, although the dots were a bit bigger than I liked. Then I made a massive tactical error. 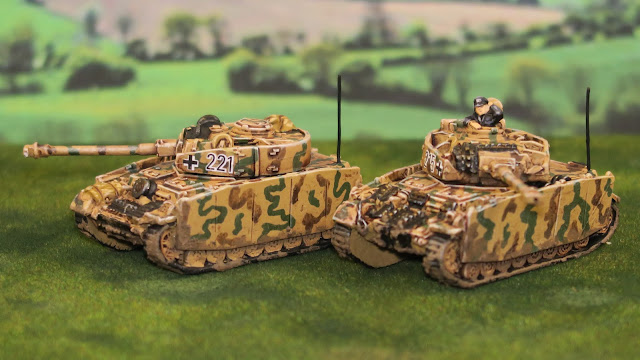 I usually apply an ink wash to my models to darken shadows and, in the case of vehicles, deepen the recesses around hatches and engine grills etc. This time, for reasons even I don't understand I didn't use my normal ink but opted for Army Painter Strong Tone instead. And frankly, that ruined the models. They were way too dark and unlike regular ink, I couldn't clean away the dried excess with a wet brush. The models looked absolutely terrible and I couldn't bring myself to submit them for judging. In the end, I decided to start over so I stripped and re-base coated them. Heartbreaking, but utterly necessary!

The second time around the results are much better. I have applied a much simpler hard edge camo design and my usual ink wash (Peat Brown Winsor and Newton Calligraphy Ink watered down 40%) and I am much much happier with the end results. As much as it killed me to restart these I just couldn't bear to present them in their former state. And the lesson folks is that even an experienced model painter can f-up occasionally! 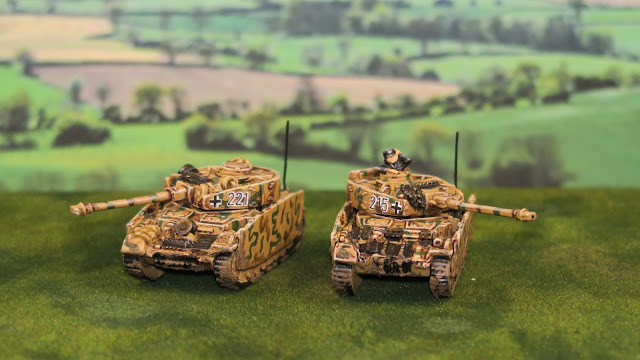 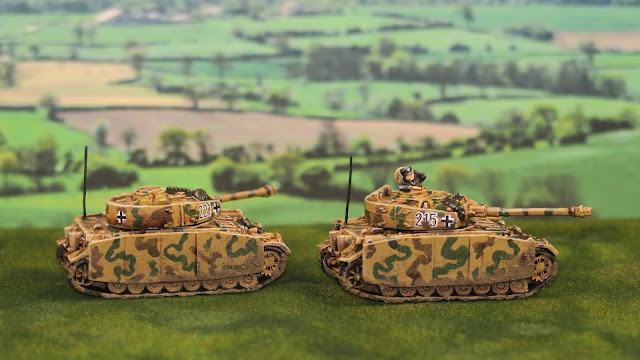 The Panzer IV was an important tank, not because it was the best, but because it had such a long service life. It was continually able to be up-gunned and modified meaning it saw service through the whole of WWII in various iterations. These are the Ausf.J, the final production versions of the Panzer IV. In many ways, it was simpler than the earlier Ausf F version, in large part to speed production in the face of heavy battlefield losses against the Russians. The Ausf J was armed with the 7.5 cm KwK 40 L/48 gun and had 80mm rolled homogeneous armour on the front and 30mm on the sides. One innovation fitted to some, but not all, J's (and not on these models) was the move from solid Shutzen side plates to Drahtgeflecht Schürzen (Steel Mesh) which obviously saved weight but was found to be just as effective against shaped charge projectiles like Bazookas. 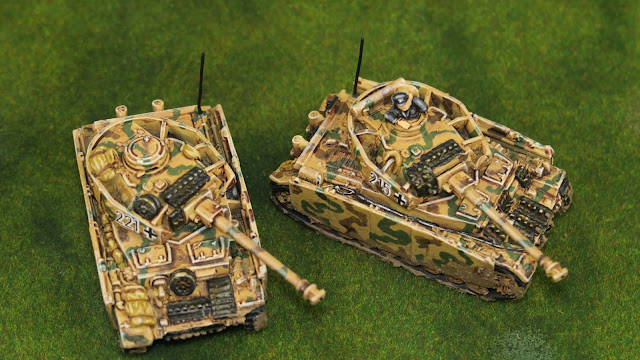 Having to clean and repaint these was a hard choice, but I was so unhappy with my first attempt I just couldn't bring myself to enter them in the Painting Challenge. I'm much happier with the second attempt and they are now ready for use.