In the 6th Analogue Challenge I rather cheekily entered a couple of 6mm Mk IV tanks in the Nautical bonus round. My reasoning was these were 'landships' and were therefore a valid entry. This year I decided I would reprise my entry of MkIV's but this time I have opted for a couple of 15mm versions. 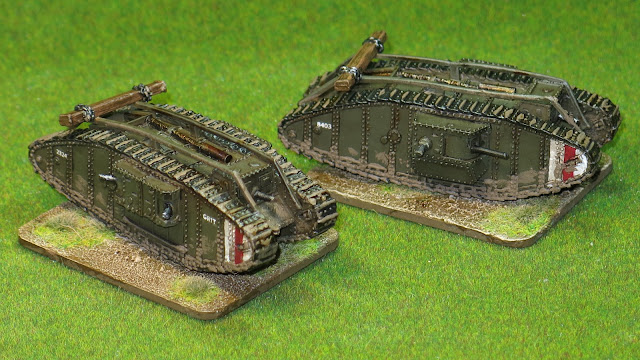 These are from Battlefront and are composite models with a combination of Resin, Metal and Plastic parts. I'm not normally a fan of mixing resin and metal parts but Battlefront seem to have made a good job of avoiding warping and misaligned joints. This particular set went together with minimal effort and required very little cleaning prior to assembly. 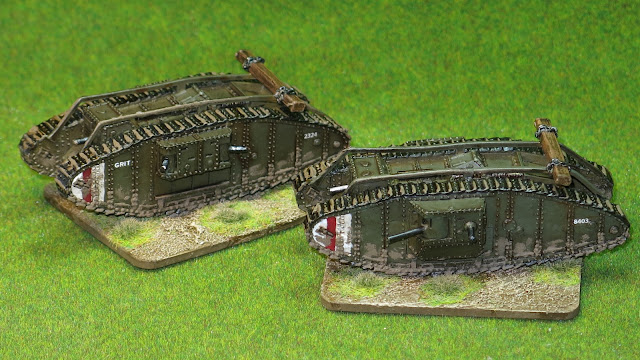 The Battlefront set includes two MkIV's and two sets of sponsons and Guns so these can be made up as either Male or Female tanks. The Mark IV Male carried three Lewis machine guns and a QF 6 pdr 6 cwt gun in each sponson. The Female tanks were equipped with five machine guns making them formidable anti-personnel weapons.

I have gone for a simple plain color design with an emphasis on weathering effects rather than on camouflage. In particular I made extensive use of a Rust weathering liquid by AK that I bought a few months ago. I used this on all the joints, rivets and exposed metal surfaces. I also used a Tamiya weathering stick to apply mud effects to the tracks and lower hull of the vehicles. This stuff is thick, gloopy and sticky (just like mud) and produces a very realistic looking effect.

These earned me a respectable 62 Points and have pushed my progress in the Challenge way ahead of schedule.