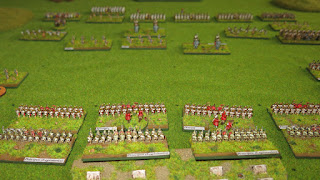 After months of preparation I have finally reached a point where I can play a To the Strongest game at home against the Young Padawan. I worked up two approximately equal forces (with a slight points advantage to the Carthaginians) and some basic terrain so we could have our first proper game with my newly minted armies. This game was more about familiarizing ourselves with the rules than anything else. Reading a rule-book is one thing but I find I need to play a game to start understanding how things work.

The Setup
This is a fictional battle between the Army of Hannibal and the Republican Romans sometime around 212BC. Both armies have been aware of each other for several days and have played the usual game of nerve, typical to warfare in this era. Four days ago the armies camped just a few miles apart and over the next three days they have tested each others resolve and shifted positions getting progressively closer and more belligerent. Today both sides feel they have an advantage and it looks as if the two enemies will finally meet each other in battle.

** Technically not allowed in the army lists but I still have some allied units to paint up so I made up the Carthaginian army by fudging the lists for this game.

This order of battle gave the Carthaginian's a numerical and points advantage but I foolishly thought this would just make up for the Padawan's inexperience and create a more balanced battle.

Analysis
This was a test game played to as close to a proper full scale game as we could given time constraints and the fact that we are both novices with these rules. All things considered the game went very well and although we run out of time (the table was needed for Sunday lunch!) we still had enough time for a decisive Carthaginian victory to be obviously clear. Playing another couple of turns would only have emphasised my humiliation!

One of the benefits of playing this battle was that I now have a much clearer idea of what units I need to paint next. The Carthaginians need some Gaulish and Latin allies while the Romans are desperately in need of some allied cavalry. I also need to make or buy some more terrain for future games so my to-do list just got even longer.

The main purpose of the game - other than fun of course - was simply to learn the rules and to test various elements to see if I had missed something. One of the main things I wanted to test was the use of numbered chits rather than cards on the games surface (there isn't enough space for cards on a 3" grid). We found that this worked well considering the space constraints. I am waiting for delivery of a load of d10 dice to use in future games and I may use these to replace the use of cards. The idea is that these can be rolled instead of turning cards and each dice can then be placed behind units instead of laying down cards or numbered chits. This will clearly take up less space than cards and will be marginally quicker than turning cards and then placing numbered chits down. Whether this is a good idea or not remains to be seen.

One thing I realised early on in this game was that the 3" square grid isn't quite big enough for my bases. The units themselves fit OK but there isn't much spare room in the box for things like ammo and disordered markers, generals etc. I'll make a new mat with 4" squares for the next game and see how this works. Once I'm happy with the size grid I'm using I'll make a more permanent mat with some texturing and shading on it - the plain green mat alone looked very dull in this game.

So there you have it. My first TtS! game ended in defeat at the hands of my daughter but also helped define the course of this project over the coming months. I have a lot of work to do.
Posted by BigLee at 06:56