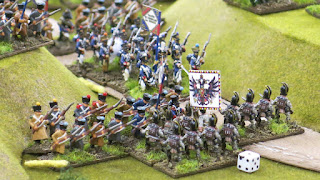 The latest game at Reject HQ (AKA the Shed-o-War) saw four of us squaring up in a Napoleonic battle that tested our metal as well as our wits. Postie presented us with the closing stages of the north of the Battle of Eckmühl (also known as "Eggmühl") during the War of the Fifth Coalition of the Austrian Empire and the United Kingdom against Napoleon's French Empire and Bavaria.

The entire battle took place on the 21st April and 22nd April 1809 but we focused just on the action near the town of Luckenpaint on the 21st. Posties version of this action brought together the two sides in a non linear encounter battle which quickly developed into a cross between a complex and cerebral chess game and a blood soaked slugging match.

The Action
The French are marching fast towards the Austrian positions. Off table the French 2nd Cavalry Division under Gen Montbron is hastening towards the battlefield. Across the table the Austrian Advance Guard the 1st Brigade is partially in position with the 2nd Brigade marching up the road towards the position. The Second Austrian Reserve Corps under Gen Kunmayer is at the far end of the battlefield with a long march ahead of them. Behind the hills on the right of the picture the Austrian 2nd and 3rd Cavalry (Curassier) Brigades remain hidden.

Even taking into account my deplorable handling of the Austrian reserve cavalry I was very happy with the way the Advance Corp handled themselves. Both sides had taken a severe mauling but it definitely felt that the French had had the worse of the battle so far. Despite concentrating their whole army on a narrow front they had not been able to sweep the Austrians away without a tough fight.

Analysis
Everyone had a great game and despite the tough fight we all felt that the battle was one of the best we had played for a long time. The French had cleverly decided to concentrate their attack on a small section of the Austrian lines but stubborn resistance by the advance guard had blunted the hammer blow. Even the failed Divisional Morale Check had played into the hands of the Austrians allowing them to fall back in good order to their pre determined second line of defence.

An excellent game enjoyed by all the players on both sides. A pretty good result for all concerned.
Posted by BigLee at 12:22