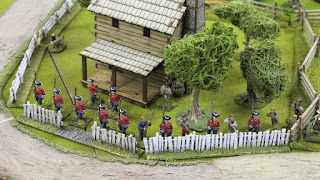 On Monday some of The Rejects gathered for a special weekday evening game in honour of our temporarily returned Fran (aka The Angry Lurker). Fran is here for a week and was at Salute over the weekend but we couldn't let him go home to Ireland without a game in the Shed-o-War. For me this meant traversing the QE2 Bridge in rush hour to get to Gravesend for a 7 pm start. As it was the traffic wasn't bad at all and I made it to the game with plenty of time to spare.

I haven't done a full BatRep this time, because there wasn't really much time for note taking and carefully considered plans. It was out to the shed and start fighting as quickly as possible. Normally we would play a game like this over a five or six hour period but this time we had a maximum of about four hours, less if we started nodding off. I still had a long drive home and I know some of the other rejects also had long trips ahead of them so none of us were eager to stay too late.

Analysis
The British chances of success were slim from the outset, especially when we lost the initiative in the first round and Ray subsequently lost the bridge. Any effective opposition to the French here was over from the start and Ray spent most of the game in a fighting withdrawal to reach more favourable ground on which to mount a defence.

Essentially this was a battle of two halves, with one side having pretty much all of the action and the other side being a rather low key skirmish of little importance. My troops were not about to engage Surjit's Indians in melee and he wasn't going to charge into my gunfire, especially as I had half a dozen civilian riflemen in my ranks. Our game consisted largely of a stand-off that secured the flank of John and Ray's troops and kept the Indians on our side of the table out of the action. I did eventually feed a few of the riflemen back towards the other side of the filed overlooking Fran's advancing troops but this was too late to play a role. I should have moved them a couple of turns earlier, but I suspect the battle was already lost for us by then.

It was great to see Fran again, catch up on all the news, talk about our experience of Salute and all our purchases and of course for Fran to reintroduce the work 'Fek' to our vocabulary.
Posted by BigLee at 21:01