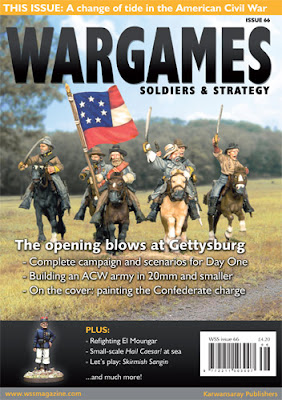 My copy of Wargames Soldiers and Strategy arrived in the post yesterday and I've had a quick scan through its pages. I'm kicking myself now for not going digital when I resubscribed a couple of months ago. Its great to get the magazine in the post but I have definitely 'seen the light' as far as digital is concerned. Next time I resubscribe I'll opt for an electronic version.

This months theme is the Battle of Gettysburg, and its a cracker. The American Civil War is my favourite period after WWII and I always enjoy it when The Rejects dust off the Fire and Fury Rules for a game. The Themed articles are a series of Scenarios for playing the opening stages of the battle. They could all be played as stand alone games but equally they could form the basis of a campaign-like series of games that enable players to really get under the skin of this pivotal battle.

Presenting the scenarios like this is a really good idea because it gives players a chance to pick and choose the level of engagement they want to go for and has the flexibility to be easily converted for different scales and rule sets. As always each of the 8 scenarios is accompanied by excellent colour photo's and usual high quality maps readers have come to expect from WSS.

This issue isn't all about the Civil War though and there are some notable articles details of which can be found on the WSS website. But as usual its the regular columns that have caught my attention and got the old grey matter working.

Rick Priestley's This Gaming Life has got to be one of my favourite columns in any gaming magazine. This month he's discussing the phenomenon of brand loyalty and how us gamers have a tendency to be a tribal bunch. I'm not sure I agree with the suggestion that this is the predominant situation within the gaming community but certainly there are some gamers who are 'loyal' to certain games to the exception of all others. These are probably also the same people that vent their often 'colourful' opinions about alternative rules systems across various forums, or maybe I'm falling into the same trap of stereotyping my fellow gamers. I certainly don't recognise myself in this article but maybe that's because I have the benefit of being part of The Rejects who's interests are diverse and wide ranging.

Richard Clarke's column Up Front suggests that the supposed The Golden Age of Wargaming back in the 70's is in fact something of a myth. Instead he suggests that now is the Golden Age with such a wide variety of periods being covered by stable and long lasting and mature companies that are increasingly sophisticated and professional. Gone are the bad old days of 'here today, gone tomorrow' game companies where ranges were short lived and sometimes poor quality.

Alexander Kawczynski (of Anatoli's Game Room) has written a good article about the The blessings of the World Wide Web. Like me he started gaming back in the dark ages, before the Web and before most ordinary people ever thought a home computer was for anything other than playing games. As a newbie entering the hobby Alexander, like me, had little or no access to painting guides and finding a local club was pretty much down to luck. But since we first discovered miniatures and wargames the Internet has exploded on the scene and changed our world quite radically. For wargamers that has meant forums, advice websites, on-line retail, video tutorials and of course more Blog's than you can shake a stick at.

In some ways this article links to Richards because for all its pitfalls (and there are many) the Internet has in my view created a new golden age for the hobby. Support and information for the newbie is better than it has ever been and the breadth of games, periods and rules available mean there are multiple routes into the hobby. Maybe (looking back to Rick's article) this is why us gamers tend to be tribal; there are so many good choices out there the only way to avoid an overload of shinybloodyitus is to focus on a particular game or a particular brand. We are in fact spoilt for choice and we should count ourselves lucky to be so blessed.
Posted by BigLee at 07:28