I started putting this troop together before Christmas but the holiday season brought things to a shuddering halt for a couple of weeks. But with the kids back at school, year end out of the way and my job settling down to it's normal level of insane hyperactivity I have finally be able to pick up my brushes and resume the project. 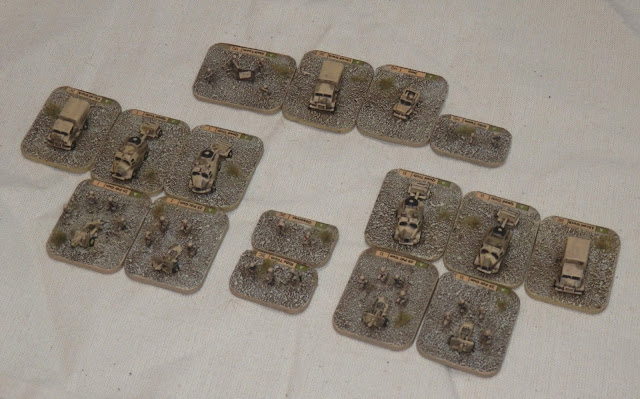 The 25-pdr Field Gun was introduced just prior to WWII but due to its versatility, rate of fire and accuracy it remained a primary artillery piece well into the 1960's (and beyond in some commonwealth countries). These examples are towed by Morris Commercial C8 Field Artillery Tractor's, more commonly known as 'Quads'.

I was able to scrounge together all the pieces for this gun troop from the models I bought before Christmas without having to buy anything new. Some items need to be repainted while others were just bare metal. One of the 25 pounders is slightly different from the others as it probably came from another model company but when painted up the difference isn't that noticeable. Also hopefully unnoticeable is one gun loader I managed to mount facing the wrong way! I also had to scratch build a map table for the Staff Team which was rather fun.

I only finished the Troop this morning and managed to take this quick photo before leaving for work. All I need to do now is magnetise the bases ready for storage and decide what my next project will be.
Posted by BigLee at 08:56