Poor Customer Service comes in many forms not just rude or obstructive sales staff. In this age of  Internet Shopping its things like late deliveries, lack of communications, mistakes in orders, unhelpful websites, and poor stock control that are probably the most common examples of Bad Customer Service that are encountered by most shoppers. And I've encountered them all in the last few months.

Regular readers will know that I have entered into a new scale recently, complimenting my 15mm WWII collection with 6mm figures and vehicles. My acquisition of a large collection of models from a fellow member of Posties Rejects has boosted my output of painted figures and without it I would probably still be sitting here twiddling my thumbs. Why? Because clearly not all retailers work to the same standards, especially where customer service is concerned. 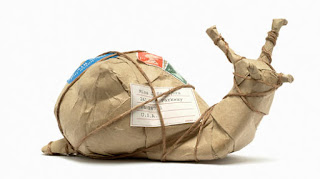 Since I first decided to go the 6mm route in mid October, I have placed three different orders and so far none of them have fulfilled my expectations. Half the items I ordered from one retailer were out of stock, despite being shown as in-stock when I placed the order. I eventually received half my order (and a refund for the missing stuff) nearly five weeks after purchasing them. A second order with a different retailer is still outstanding over four weeks after placing it. Despite emailing them I have had no communications confirming an ETA for the delivery or explaining the delay. And a third order - this time placed direct from a manufacturer - is also overdue and now in its fifth week.

Maybe I have been a bit spoiled with the more mainstream (?) 15mm market where I could easily expect to place an order on the Monday and have my goods within the week. I have also grown accustomed to purchasing items that are listed as in-stock and those items actually being in-stock and then delivered as anticipated. So far neither situation seems to apply when buying 6mm figures and vehicles and I'm rather disappointed. This of course raises the question, is this a common experience for other micro scale wargamer's out there, or am I just unlucky?
Posted by BigLee at 13:18