On Thursday last week I received the latest edition of Wargames Soldiers and Strategy in the post. I really look forward to this magazines delivery and in particular the regular columns by the likes of Rick Priestly and Dan Johnson. Ricks article this month is all about second chances and in particular new editions of well loved games. This Gaming Life - A second bite was of course talking about the news that Warhammer 40,000 has been re-launched for the sixth time - but his article struck a cord with me because I immediately thought of the imminent 5th Edition re-boot of the Dungeons and Dragons Roleplaying game rules. 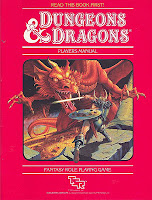 The central premise of the article is that while it is almost inevitable that games designers and publishers might want to update, revise and improve on successful rules systems this process nearly always fractures and divides the existing community of players. Warhammer 40,000 appears to have bucked this trend but I suspect this is more to do with the business model of GW and its relentless supply of teen and pre-teen players feeding into the hobby and moving on as they get older (yes, I know this is a stereotype and probably inaccurate, but its my perception of the business). But for games like D&D, which have always had a broader audience of players the result of each subsequent re-boot has been the inevitable and painful division of its core player base. Old farts like me hanker for the game they knew in their youth while newer players are brought into the fold by the latest glossy edition of the rules.

There are still players out there that have resolutely stuck with the Basic Rules, or AD&D or 3rd Edition etc. With the possible exception of 3rd Edition (which introduce the popular d20 system) every other reincarnation of these rules has had a painful birth that has left some players behind. Ever since the acquisition of D&D by Wizard of the Coast many players have been suspicions of the over commercialisation of the brand. WoTC are essentially a publishing house and they make money by selling books, so it was no surprise when supplement after supplement began to be churned out for admittedly eager players and GM's. As a player during that period it sometimes felt as if there was a storm of reference works being published, many by companies other than WoTC. So while the D20 system arguably revitalised the brand it also sowed the seeds of its own demise at the same time. 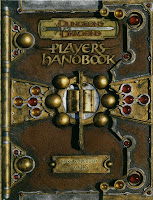 The problem with supplements - especially the 'unofficial' ones, is that with each new set of the rules the flaws in the core rules became more and more obvious. A common complaint during that period (and still today) was "the maths are broken". Thus the pressure for a new edition (beyond the need of a publishing house to publish another book) became inevitable, resulting in yet another splinter group undermining the core fan base of the game. This cycle is being repeated once again with 5th edition. I've read a lot of pro-5th edition rhetoric about how this version is inspired and developed by the fans and will usher in a new golden age for the game. I've been around long enough to have heard it all before. Sooner or later a new set of supplements will start to be published and the whole downward spiral will start again. And in the meantime a few more players give up, move on or abandon the 'new' version for the one they prefer the most. 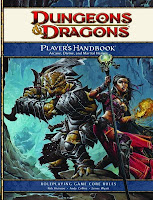 I should state that I don't subscribe to the rather pessimistic view that 'real' D&D is dead. Although I have my preferences regarding which edition of the rules are best (duh! Basic of course!!) I don't see the splintering of the games player base as a necessarily bad thing. We are all essentially playing the same core game, with the same principles of co-operative storytelling that Gygax and Arneson forged way back in 1974. Ok so the rules systems have diverged with each edition but when you put the rules to one side its clear that the respective systems have more in common than they have in conflict. If you put two D&D players together its not the rules they tell anecdotes about its the 'adventures' they had with their characters.

So will I be buying 5th Edition D&D? Probably, but only out of curiosity and not because I expect to play the game. And if my group decides to return to the best RPG in the world I expect it may be using an earlier edition... with a healthy dose of house rules thrown in. At the end of the day the rules are unimportant; the adventure's the thing that really matters.
Posted by BigLee at 10:27