The Nebelwerfer Rocket Launcher was a much feared weapon which saw increasing use by the Wehrmacht as the war progressed. The 21cm NW42 was a larger version of the 15cm NW41 and in Flames of War provides a cheaper alternative to more costly Artillery batteries. I would have had these finished a week ago but my recent illness slowed their completion a little. 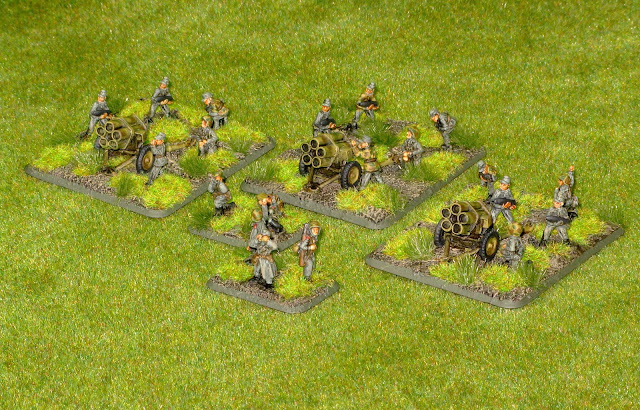 The NW42 was a five-barreled multiple rocket launcher mounted on the towed carriage with a pivoting stabilizer on the front to steady the launcher when firing. The 21 cm Wurfgranate (thrower-shell) 42 rockets were spin-stabilized and electrically-fired with high-explosive warheads. The rockets were fired one at a time, in a timed ripple and had a prominent exhaust trail that kicked up large dust plumes. This meant that Nebelwerfer batteries had to relocate quickly to avoid counter-battery fire. The rockets were also inaccurate and landed in a dispersed target area due to uneven burning propellants and other factors. None the less their screaming flight and the random destruction they wrought earned them the nickname Moaning Minnie's.