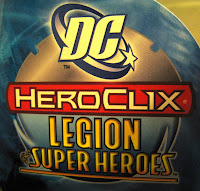 The Dagenham Dungeons Delvers gather last week for our regular game session but this time without our GM. Unable to continue our D&D campaign we decided to spend the evening playing something else. One of our group brought a HeroClix starter set of DC Super Heroes. He also had a few other (earlier) models and between them there were enough figures for three players to put together a 300point team each.
Two of us had never played HeroClix before but we were quickly able to grasp the basics of the game and understand its simple mechanics. We started off with a training game just to get acquainted with the rules them moved on to selecting our own 300pt team and battling it out against each other. And I have to say it was great fun.
﻿﻿
﻿﻿ In many ways what we were doing wasn't a great deal different to our regular D&D games where combat (and the use of miniatures on a map) is a large element of each game. I saw a strong parallel between the powers and abilities of the HeroClix system and the powers used on 4e characters. Certainly the combat didn't feel much different from playing out a 4e combat scenario.
﻿﻿﻿
Clearly we are not about to abandon our D&D campaign to concentrate on HeroClix but I suspect that this won't be the last time we don the Spandex (metaphorically speaking of course) and battle it out against fellow superheroes. ﻿﻿
Posted by BigLee at 09:01