Anyone that follows my blog knows that I visit a lot of museums and living history events. Like everything else, these have either been closed or cancelled and with Posties Rejects unable to have any games this has meant that my weekends have been a bit empty! Part of my reason for doing the Quarantined Wargamer videos has been to keep me occupied when I would otherwise be out and about. As social distancing rules have been eased in England, combined with some decent weather, we have been trying to get out for some much-needed exercise. Unlike tens of thousands of people, we knew the coast would be packed (social distancing be damned apparently) so instead, we stayed away from the crowds by visiting Hornchurch Country Park.

We have visited quite a few local country parks over the last couple of months and aside from a handful of dog walkers and a few family groups, these have been largely empty. We'd be forgiven for thinking the nation had hollowed itself out as everyone and their granny headed for the coastal edges of our little island! I live in a London Suburb and as any fellow urbanite will tell you, it's never quiet. We are fortunate to have a garden to relax in when the weather is good, but its not a place for peace and quiet. Although all the country parks we have been too are within the M25 (for non-UK readers, that's the orbital motorway that effectively encircles Greater London) they are blissfully tranquil compared to my back yard. And Hornchurch Country Park has a little extra to entice me because it was once the site of RAF Hornchurch. 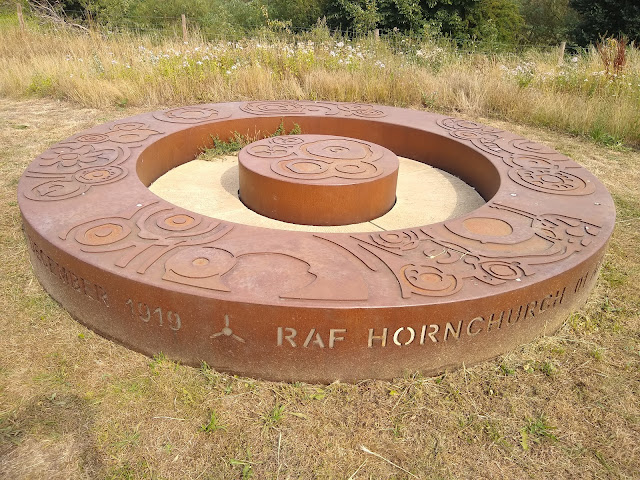 The Airfield at Hornchurch first saw service in WWI until it was decommissioned in 1919. It had a new lease of life in 1928 when it reopened as RAF Hornchurch. Unfortunately pretty much all of the WWI structures were levelled when the site reopened so the remaining archaeology is mostly from WW2. The squadrons based here got their first real taste of war during the Dunkirk evacuations as they flew sorties to protect the ships. 28 Aircrew lost their lives in this mission. The next test was the Battle of Britain, as the RAF across the South East of England sought to defend Britain from the might of the Luftwaffe. Control of the skies was vital if the Germans were to launch their invasion (Operations Sealion) but after heavy air losses, they abandoned the plan. RAF Hornchurch was literally in the Front line for this crucial battle and its not hyperbole to say that if they had failed, and the invasion had taken place, the war would have taken a longer and much darker turn.

The purpose of our afternoon out was to get some exercise but the added bonus of exploring a little bit of history at the same time made this a great - and much needed - trip out. My wife and daughter were quite amused at how excited I got when we parked up and I realised we were in an E Pen, and later when I would go running off into the scrub to explore an abandoned Pill Box. Incidentally if your interested check out this website which includes some interesting information and links about the site. And it's also worth watching the Two Men in a Trench episode from 2004 (available on the BBC Archive) when Dr Tony Pollard and Neil Oliver visited the site and dug some of the archaeology.