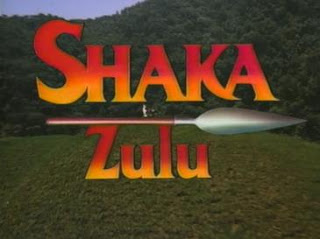 I recently discovered that the 1986 mini-series Shaka Zulu was on Netflix and, although it is largely set some 50-60 years before the Anglo Zulu War of 1879, I was interested enough to take a look at the first episode. I wasn't expecting much from this 1980's South African made TV series but I couldn't have been more wrong and I have been gripped by all 8½ Hours of it. I was a little amazed that I hadn't seen it before but it does have a lot of nudity (entirely culturally authentic) and graphic violence so it's probably not the sort of show that would have got an airing on the BBC!

The film is based on the writings of the first British traders to enter the Zulu Nation during the reign of Shaka. They were sent by the colonial administration of what was then the Cape Colony to discourage Zulu expansion south into British territory. What the 'traders' discovered was a highly organised and vibrant culture full of political intrigue and self confidence on a scale that utterly amazed these white men who had expected to find a bunch of ignorant savages. The first few episodes start from the European/Colonial perspective with the local Governor worrying that Cape Colony could be at risk from the neighbouring Zulu nation. They decide to send a deputation to the Zulu King partly to assess their intentions but also to intimidate Shaka and impress upon him the foolishness of any threats towards the white colony to the South. The British delegation find themselves utterly outplayed by the shrewd and intelligent king in their first meeting. 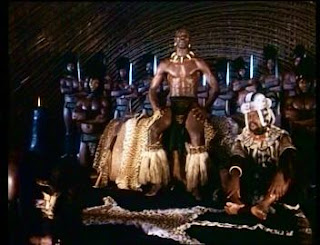 It has to be said that the series does take some liberties with the known historical facts, although I would argue no more than most movies usually do. The timelines of key characters and events have been moved around with events like the Battle of Ggokli Hill for instance depicted taking place nearly a decade after it actually happened. But in other areas, such as illustrating Zulu culture, I thought were very well done. Shaka's 'madness' at the death of his Mother for instance ties in well with the historical record and his imposition of mass executions and enforced national mourning that followed lead directly to his death at the hands of his his half-brothers Dingane and Mhlangana.

The Wikipedia page on the TV series includes a link to a 1986 LA Times review of the series that was less than flattering. I don't agree with much of the premise of the review but there was one paragraph that had me laughing out loud:

"In fact, "Shaka Zulu" may be the most violent TV production ever shown nationally in America. It has lots of blood spilling and blood drinking, lots of spearings and grisly impalings, with many of the impaled writhing on long sticks. There are burials of the living and a couple of beheadings, one of which affords close-ups of both the head and headless body. It is probably also the nudest production ever shown on America's non-cable TV. That includes male rear ends and female bare breasts."

Roll forward to 2018 and all I could think was "how quaint". If this series were made today it would be right at home on HBO! 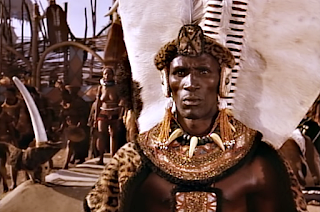 One of the criticisms levelled against this series by the LA Times review was that the story was very violent "There is no interpretation here, no motivation shown beyond savagery. Violence is shown as the product only of barbarism or black magic." I think the reviewer needs to re-watch the series because I thought there was plenty of motivation and backstory and it was clear that this was more than just a story of savagery. It is an often violent history but the motivations of the key players are rich with love, jealousy, pride, arrogance, intrigue, ambition, politics, madness as well as a belief in magic and destiny; indeed everything you would expect in a good Shakespearean history.

There is another side to this TV series though that is less than uplifting. It was made during  a period of international sanctions against the apartheid government in South Africa. The South African Broadcasting Corporation put up the twelve million dollars it cost to make the film but in order to distribute it overseas (and bypass the sanctions) they used an American company. This company, Harmony Gold, ended up taking 80% of the profits from the film which were estimated to be in excess of $500m! Meanwhile many of the black stars of the film were paid a pittance, including Henery Cele who so magnificently portrayed Shaka in the series.

I thoroughly enjoyed this mini series and my review reflects this, but if you are interested take a look at these two opposing reviews, one positive by the NY Times and the aforementioned LA Times article which was quite negative. There is also a great review on the blog My Two Cents that is worth reading. Even better, go watch the series on Netflix (I think its also on YouTube) and form your own opinion. I don't think you'll be disappointed.
Posted by BigLee at 09:09