My annual pilgrimage to Crystal Palace show didn't happen this year thanks to a spot of car trouble (more on that in due course) although it shouldn't come as much of a surprise to me as its been something of an on-again off-again affair for months. Initially I though I was going to miss the show because my Teacher wife has just had a numerically significant birthday and we were planning on taking a holiday during the Half Term break. However that plan went out the window several weeks ago and I tried really hard not to show my happiness when I realised I would be able to attend SELWG after all. I guess its Karma therefore that my excitement at attending the show should come to an (almost) crashing halt late last night. 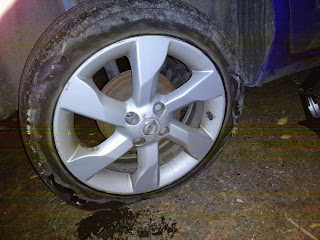 I've never experienced a tire blowout before so I guess I should count myself lucky that it happened at relatively low speed and where I was able to pull into a lay-by. I say lucky because just a few minutes earlier I was travelling at 70 mph on a badly lit road. Not only did the wheel fail but it shredded in a way I hadn't thought possible and when I pulled over there was literally smoke rising from the tattered rubber that used to be a tire. I then attempted to change the wheel for the spare, whereupon I found that even my weight behind the wrench was not enough to get the wheel nuts off. The impossibly tight bolts even stumped the AA who arrived 40 minutes later and that was the point I realised my plans for a day at SELWG had bit the dust for the last time. So rather than writing a long post about one of my favourite shows - with accompanying photo's - I've spent today at home trying to sort out my car.

I've commented on this before but the SELWG show seems to have an almost supernatural effect on the weather. Every year, regardless of the prevailing conditions in October, the day of the show is nearly always a bright crisp and beautiful autumn morning. This year was no exception and when I looked out at the weather today my heart sank even lower. So I guess all that is left to do now is wait to see the pictures posted online by those that were able to attend, and plan my trip to SELWG for next year. Maybe I'll have better luck in October 2019!
Posted by BigLee at 17:24