Calm before the Storm

Sorry the blog has gone a bit quite for a while, but its not because I haven't been busy. Like many of my fellow wargame bloggers I am entering this years Analogue Painting Challenge. Preparation has been underway for some time and the net result is that although I seem to have been very busy for weeks, I haven't got a lot to show for it. 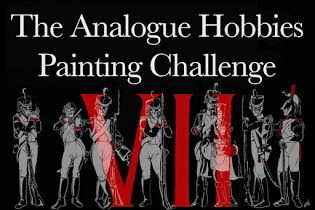 Prep work is nearly finished, at lest on the models I have at the moment. I've already broken my first rule of (this years) challenge which was to get through it without recourse to points from the bonus rounds... but the siren call of some of the categories was just too much to resist. And if I didn't enter the 'Armour' round I couldn't legitimately call myself a tread-head any more!

More models are en route to Castello del Hadley and I have what passes for a strategy (it'll probably go to pot in week one, but I live in hope). I have also put together a spreadsheet to keep track of my progress and measure it against last years performance and against my target for this year. Either I have too much time on my hands or (my preferred explanation) I have been inspired by the statistical antics of fellow challengers like MilesR. His stats are a wonder to behold.

My Phalangites now all have very sharp pikes in their hands. I have also increased the number being painted from four to five bases of 48 figures per base....that's 240 opportunities for me to puncture my fingers! Painting this lot will take a lot of patience and quite a bit of care but hopefully they will look awesome when they are finished. The only minor problem I have encountered is that I have run out of the spray primer I like for my 6mm figures. I use a brown primer which I find works really well as it means if I miss something on a model it looks like I did it on purpose! Brown also makes it a little easier to see the details than using a black primer. The brown I like was English Uniform from Bolt Action, but as far as I can see its no longer available and I need to find a similar alternative.

Hopefully all this prep will be finished by the end of the weekend and that will give me a couple of weeks to finish off some terrain projects before the Challenge starts in earnest.
Posted by BigLee at 14:04