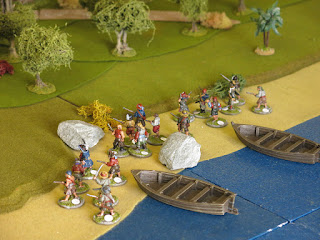 The latest game at Reject HQ saw us come about as close to 'fantasy wargaming' as I have ever seen in the shed-o-war. Two rival Pirate Captains and their crews have learned of the secret hiding place of a hoard somewhere on Alligator Island and both are determined to find it first and claim it for their own.

Posties rules for this setting were essentially the same as those we use for his French Indian Wars games, which means the play is simple and therefore fast... especially as numbers get reduced by casualties! Basically each model has two actions (move, fire, reload, pick up an object etc) and must complete all his actions before moving on to the next model.

The Setting
Alligator Island has a reputation as a dangerous place and is therefore the ideal location to hide a pirate treasure. Somewhere hidden in the jungle is a clue that will identify the location of the gold, but the players have to survive long enough to find it first. Both crews are equally matched in terms of numbers but how to split up the shore parties is left to the discretion of the Captains. Ian and Surjit divide their men into two large parties with most of the best fighters in one group and musket armed men in the other. Meanwhile John, David and myself divide our men into three equal groups with a similar composition in each.

Order of Battle
There wasn't an OOB as such. each side had 18 men consisting of three character figures, one sharp shooter and one good fighter. The rest were an assortment of scurvy swine equipped with muskets, pistols and swords. All the models were 'named' and where possible I have tried to use the names to accompany the pictures below.

Analysis
Its rare that a game literally goes to the last man but this fight certainly did. Ian and Surjit did the right thing dividing their men into two large groups because it enabled them to concentrate on our smaller shore parties. Having said that both sides enjoyed considerable luck with the dice at times and terrible luck at others. The advantage seemed to swing from one side to the other throughout the game until there were just two men left.

This was a great little skirmish game and ended up being a proper little morality tale...instead of 36 men enjoying the rewards of cooperation the game ended with one very rich Captain and 35 corpses!
Posted by BigLee at 20:33