The Battle of Ludford Bridge 1459 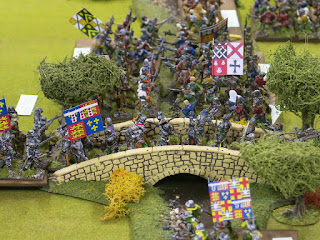 This was a War of the Roses Battle that actually never happened...until now. After the battle of Blore Heath, the Yorkist factions regrouped at Ludford bridge near the town of Ludlow. They soon encountered a much larger enemy army led by Henry VI. The two sides took up positions either side of the Teme river and prepared to do battle the following day. However over night there were significant Yorkist desertions - most notable of which was Andrew Trollope captain of the Calais troops who was offered the Kings Pardon if he switched sides - which prompted a full scale retreat the next morning. Following this 'defeat' Richard returned to Ireland and the earl of Salisbury fled to Calais.

Our game assumed that Trollope's defection was as yet undecided and that Richard had therefore elected to fight rather than flee. Ray has already posted his review of the game here and its worth checking out for a different perspective on the same action.

Well that was a disappointing game. Both sides were equally matched across the river so this was going to be a test of nerve and luck right up to the point when the Calais troops threw in their lot with the Lancastrians. Even if we had managed to force our way across the river my troops in particular would have been left badly outnumbered and outflanked. In short there was a good reason why this battle never took place historically and forcing us to play the scenario just showed that Richard made the right call back in 1459. With the loyalty of key units like those under Trollope in the balance this was just too risky a battle to undertake.

My first loss of the year but I am consoling myself by saying this was an unwinnable scenario from the outset. Maybe I'll have better luck (and a better scenario) next time.
Posted by BigLee at 17:34