Ink or Quickshade for 6mm?

A few years ago I experimented with various products for shading models with Ink and ink alternatives. At the time I was predominantly painting 15mm figures and in the end I settled on using Winsor and Newton Ink as the best way to produce deep shadows. Used with dry-brush highlighting it worked well on 15mm figures. When I started painting 6mm vehicles I used the same technique but then I discovered small bottles of Army Painter Quickshade and gave them a try. They worked well on infantry figures and I ended up using them almost exclusively. But last weekend I realised I had run out of Quickshade, prompting a temporary reversion to Winsor and Newton Ink. I rather liked the high contrast shadows it created and decided it would be worthwhile revisiting the whole "what to shade my models with" debate.

So here's my rather unscientific test, pitting Quickshade Soft Tone and Quickshade Strong Tone against Winsor and Newton Peat Brown Ink. I've used some spare Italian tanks I had and base coated the models with Tan Yellow (912) before applying the inks. 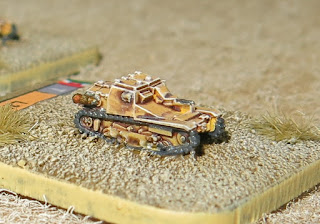 My personal preference is the Winsor and Newton because I prefer the bold dark shadows it produces. Like the Quickshade Soft Tone it doesn't obscure the base colour and flows easily into all the recesses. I think that combined with strong highlighting it is possible to make even 6mm models stand out on the games table. Of course the best results rely heavily on the model itself having plenty of detail for the ink to settle into and I think this would probably work best on vehicles rather than infantry.

The finished effect might not be to everyone's taste (all painting is a matter of personal preference) but I quite like it. Having made my choice I am interested to hear what other 6mm wargamers prefer. Do you even use ink on figures at this scale? Or maybe you think that different types of ink or shade suite different types of figures? Whatever the answer I'd like to hear what you do, if only to gauge how far off the mark I am!
Posted by BigLee at 06:28