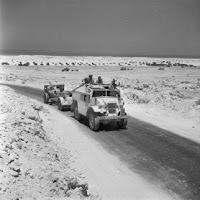 It seems I'm never happy with the terrain I have made because this is the third time I have revisited my desert roads. My first attempt was a temporary affair and the roads I made were rather flimsy and didn't stand up to much use. Then a few months later I had another go and made different set of roads that were much more robust and I think looked a lot better.

I used this set in my Alam Halfa game last year and made more than enough for that particular game. But looking back at my pictures I decided that the roads were 'missing something' and looked far too neat and clean. Not at all like the dark metalled roads with sand encroaching along the edges that I had originally envisaged (see the picture on the right). So over the weekend I finally 'bit the bullet', dug out my desert roads and spent a few hours undertaking some necessary improvement work.

To achieve the dark road I simply dry brushed the middle of the road with black paint (why on earth didn't I think of that when I made these?!?). I tried using charcoals and even black crayon on some spare material but neither looked any good so in the end I simply went with my first instinct and dry brushed with my regular acrylic paints. A warning to anyone wanting to copy this idea: dry brushing paint directly to a sandpaper road surface utterly destroys brushes! Having said that I think the finished effect looks a lot closer to my original idea and I'm really happy with the roads now. So happy in fact that I took the opportunity to make about ten feet of new roadway - including several Junctions - so now I have more than enough for my future wargaming needs... even for games on Posties massive table in the Shed-o-War.
Posted by BigLee at 07:37