Catch that Tiger : Fact or Fiction 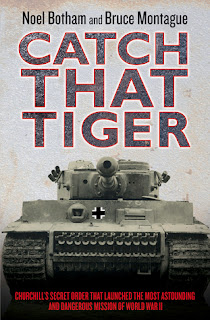 I have just finished reading a book I bought recently on the recommendation of a friend. Now that I have finished it I may have to reconsider his recommendations in future! Catch that Tiger purports to be the true story of the capture of Tiger 131 based on the secret diaries of the man tasked with the hunt by non other than Churchill himself; Major Doug Lidderdale. Taken at face value this is an amazing story of daring do and straight out of the pages of Boys Own. I don't have a problem with a good yarn but I do have a problem if its presented as fact. So is this book fact or fiction, or a mixture of both?
What do we know for certain? Records show that Major AD Lidderdale was the officer commanding No 104 Tanks Workshop REME based near Tunis at the time of 131's capture. The first official documented connection between Lidderdale and Tiger 131 was when the 104th were tasked with supervising the recovery operation on the 7 May, over two weeks after the action in which it was abandoned by its crew. His unit went on to repair and overhaul the captured Tiger so it could be evaluated and filmed for recognition purposes. While still in North Africa the Tiger was visited by several VIP's including Churchill, General Alexander and King George VI. Lidderdale then accompanied the Tiger back to England and was the author of the initial technical report on the tank in November 1943. All of these are accepted and substantiated facts.

The book doesn't dispute these facts but does elaborate and expand them into a tale, which if true, beggars belief and would rank as one of the great true life action stories of WWII.

[Spoiler Alert!] The central claim is that Lidderdale was personally ordered by Churchill to bag him a tiger. He then put together a team of engineers and waited for a Tiger to get into trouble. Then the story gets wild! They watched the action at Jebel Jaffa and saw a Tiger crew clearly struggling with a jammed turret. Lidderdale then claims his makeshift team assaulted the tiger, killing its crew in the process. If this is true this is an incredible piece of missing information as the fate of the Tiger 131's crew has always remained a mystery.

Having captured the tank his men moved it closer to the allied lines before abandoning it so it could be found by the 48 RTR the next morning! Two reasons were given for this seeming act of madness; first was that as engineers it would have been politically embarrassing for the local commanders and it was deemed prudent to let front line forces 'capture' the Tiger; second Lidderdale's secret mission from Churchill wouldn't have remained a secret for very long if the truth had come out at the time. The assumption was that the truth would be revealed at a later date but for reasons not made clear this never happened and the 'mission' was only recorded in Lidderdale's diaries and the stories he told his young son after the war.

However I - and other commentators on several WWII forums - have major problems with this book ranging from its style, its historical accuracy and the fact that it is based on as yet unpublished documentary evidence of uncertain quality. Lets look at each of these points in turn.
The Style of the book is unashamedly 'docu-drama' in format. This isn't your typical history book and in the prologue the authors make it clear that conversations presented in the story are "speculative in nature". Within just a couple of pages it is clear that what the authors call 'speculative' actually means completely fictional. Be under no doubt that most of the conversations in this book are not reconstructed based on documented letters, diaries and recollections. These are pieces of pure imagination and entertainment.
As one forum commentator stated "The book appears to be a blend of fact, over-dramatised fact, dubious fact, tongue-in-cheek fact/fiction, pure fiction and likely pure invention". Without references it is impossible to tell one type from another and so all must be treated with extreme caution. The problem is that when you take out the dubious conversational exchanges you are left with a very slender book. The obvious inference is that these were added to fill out the story.
This leads to my second criticism of the book, its historical accuracy. There are lots of minor inaccuracies in the book that have been picked up by other reviewers. Some of this appears to be a bit nit-picking but there are some 'assumptions' and statements made in the book that just cannot be substantiated. One example was the books assertion that King George VI visited North Africa purely to visit the captured Tiger. This of course raises the profile of the tanks capture and adds weight to the idea that Major Lidderdale's 'secret mission' was a war wining moment. The truth however is that the George VI's visit to the region had been planned long before the capture of the Tiger making the authors version of events a piece of pure creative hyperbole at best and bad research at worst.


There are plenty more examples like this throughout the book where the authors appear to make assumptions and jump to conclusions that you would not expect to find in the work of more learned and respected historians. But for me the real nail in the coffin where accuracy is concerned is the fact that the book is devoid of any citations for any of the chapters. There is no bibliography, no appendices with supporting documents and no references at any point in the text. Given that we are being asked to accept this story as dramatic new evidence of a previously unknown operation then it is surely incumbent on the authors to provide some evidence. From what I can tell the only 'new' documentary evidence comes from Major Lidderdale's diaries, which have yet to be published or scrutinised by anyone other than the authors.
The authors posted an explanation of their sources on the WW2Talk forum in response to similar criticisms of mine but far from dispelling scepticism they only managed to confirm the suspicions of reviewers. "The whole thing came about through Major Lidderdale's diaries being given to us by his son, David...We also had many hours of tape recordings of David recounting the stories that were told to him by his father" [my emphasis]. I'm afraid that tall war stories alone are not a credible source on which to make such wild and frankly incredible claims.

So having now shredded this book you might be surprised to hear that I actually enjoyed reading it! If you can set aside the claim that it is non-fiction and instead read it as a historical novel its not a bad read. Its a war story straight out of the pages of Boys Own or Commando and would sit quite nicely next to the works of Bernard Cornwall and Wilbur Smith. The problem is it isn't presented as fiction and the Authors make some pretty big claims in their book and are passing it off as truth. Worse still the book has been 'reviewed' by several major newspapers and online retainers who have reinforced the idea that this book represents 'the truth'. Catch that Tiger isn't a good history book, but is a ripping good yarn.
Posted by BigLee at 06:30