I've started working on my first 15mm models; the resin StuG G's from the Open Fire box set and a command StuG from the Panzer Kanonen boxed set. I'm taking my time with these as I'm entering new territory. The Resin models just needed a wash and the turrets Superglued into place before undercoating (black as usual for me). The other vehicle has more metal parts and they need some cleaning up before I attempt assembly and undercoating. 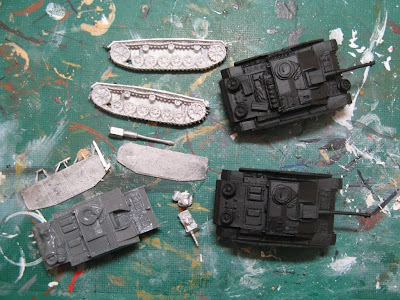 The Sturmgeschutz III was originally conceived as a close-support and mechanised artillery vehicle. However it swiftly migrated toward the anti-tank role after the Germans encounter with the soviet KV-1 & T-34 tanks on the Eastern Front. In line with the general trend toward heavier armour and armament, a new vehicle based on the StuG Ausf. F was designed, mounting the 105mm FH 18 howitzer. This version of the StuG was designated Sturmhaubitze (StuH 42) and saw its first action in November 1942. Coming off the assembly-line in December 1942, the Ausf G was fitted with a 75 mm StuK 40 L/48 anti-tank gun and was produced until the end of the war with no major changes to the design.

"The vehicles of the Sturmgeschütz series were cheaper and faster to build than contemporary German tanks; at 82,500 RM, a StuG III Ausf G was cheaper than a Panzer III Ausf. M which cost 103,163 RM to build. By the end of the war, 10,619 StuG III and StuH 42 had been built. This was due to the omission of the turret, which greatly simplified manufacture and allowed the chassis to carry a larger gun than it could otherwise." (Source: Wikipedia) 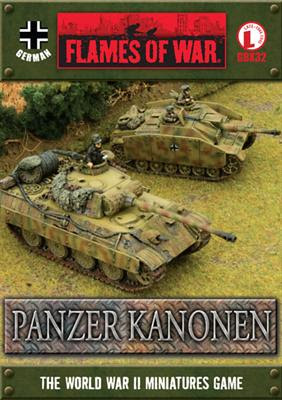 There is an interesting article about the StuG G on the FoW Website. I also found some interesting pictures of the StuG G (and other variations) on the Achtung Panzer website.
Posted by BigLee at 08:01