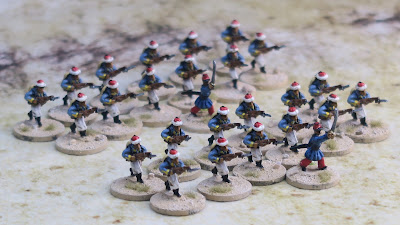 Well, it's taken long enough, but I have finally finished two units of Tirailleurs for my French Colonial project. They have sat on my desk - half painted - for weeks. I started these before my recent holiday and didn't get them completed before I left. And that break in the workflow made getting back to them all the harder. Their completion marks the end of my French Colonial project (for the time being at least) as I've now painted everything I originally set out to do. On paper at least, I now have enough points worth of troops to run some very very large games, or give myself plenty of choices when selecting units for solo adventures in the Operations Room. Now all that is left to do is play some more games with them!
The term Tirailleur was originally used in the Napoleonic era to describe a type of light infantry. However, by the middle of the 19th Century, it was used to describe the indigenous infantry recruited in the French colonial territories. In North West Africa these were recruited from the Arab and Berber communities and became known as the Tirailleurs Algerien. Until the first world war, these troops wore distinctive Zouave-style uniforms of light blue with yellow braiding, white turbans, red fezzes and red sashes. During WWI they had Khaki uniforms but the traditional kit returned for a while (it was considered an aid to recruitment) and, in later years, for ceremonial occasions. 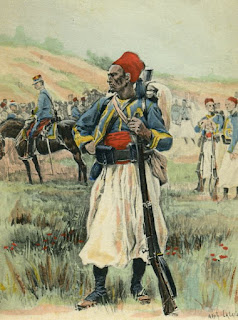 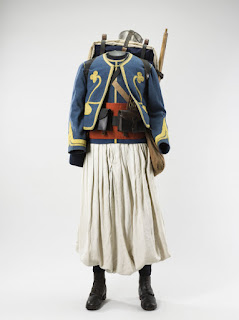 I wanted to have some Tirailleurs available because they played such an important role in the French conquest of Algeria and Morocco. It was these native troops that would often be left to garrison and maintain order in newly acquired territories, under the command of French officers of course. 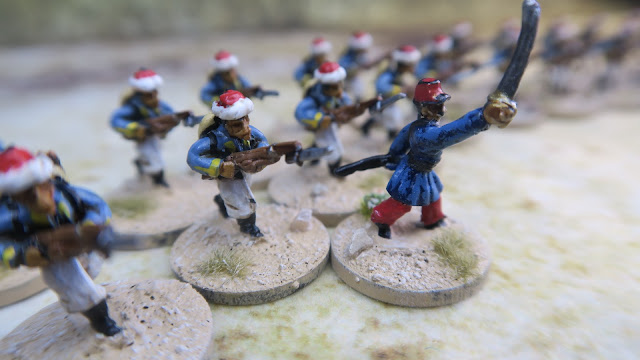 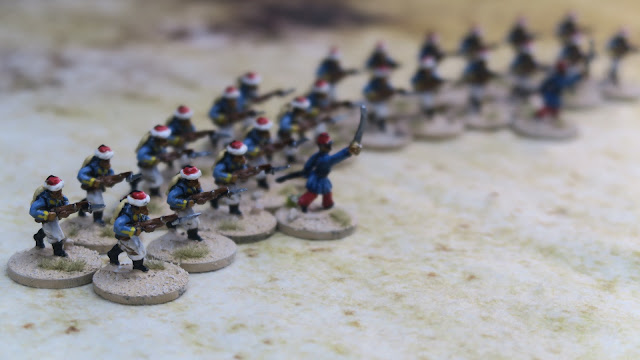 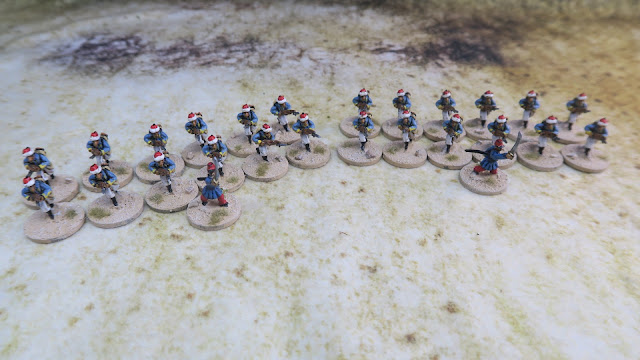 In The Men Who Would Be Kings, these are Irregular Troops. Unlike the native troops in other nations' colonial armies, the Tirailleurs were issued with modern rifles and drilled more or less as regular troops. It's unclear from what I have read how well they were trained, but one source suggested they did not receive the same quality of gunnery practice as regular units. To reflect these two traits I have made both units Well-Armed so they have modern weapons with a range of 24" but one of the units has the Poor Shot modifier and only hit on a 6 instead of a 5+.
Now all that remains is to get these guys onto the game table and see how they perform.
Posted by BigLee at 17:30