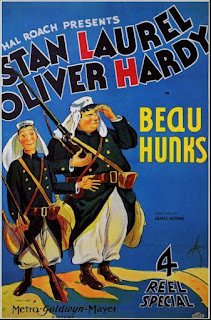 I thought I would drop a sneak peek of a game the Rejects played over the weekend. For several years now we have run a Demonstration game at the Broadside Wargames Show (formerly in Sittingbourne, now in Gillingham, Kent). The last Broadside was in December 2021 and Richard ran an excellent French Revolution game using his own set of rules (see article and video HERE). Then the baton was passed to me to come up with a game for this year's Show, just six months later! Anyone that has followed this blog, or my YouTube Channel Miniature Adventures TV, will know that I have been working on French Foreign Legion in 15mm as my project for the show.

So on Sunday, the Rejects gathered in the Shed-o-War for the first and only test playthrough of the battle I will be running as our demo game on the day. Five players gathered around the table as a Berber force attempted to ambush a Company of French Foreign Legionnaires as they returned to their lonely desert fort, somewhere in Algeria. The game itself is fictional but is based on the sort of raiding and patrolling that took place across the region in the first decade of the 20th Century. 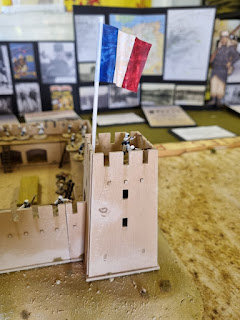 Hollywood has given us many heroic and dramatic stories about the French Foreign Legion battling impossible odds in the Sahara. From several adaptions of P.C.Wrens novel Beau Geste to more comic depictions of the Legion such as Laurel and Hardies’ Beau Hunks, we have a romantic image of the steadfast and stoic Legionnaire. But as with all such stereotypes, the real story of the Légion étrangère and the French conquest of Algeria and Morocco is somewhat different.

For the Demo Game, I will actually be running two sets of rules (yes folks, two for the price of one!). The main battle uses The Men Who Would Be Kings as the base ruleset with a handful of minor rules tweaks for this game. Overlaying this is an entirely silly (and deliberately comic) card-driven game featuring the legendary comedy duo, Laurel and Hardy. They must move around the table looking for evidence of the infidelity of Ollie's unfaithful heartbreaker, Jeenie-Weenie. Whenever they encounter a French Officer, someone will draw two cards from the Beau Hunks inspired deck of chance cards. Some of these cards affect one side or the other, some just affect Laurel and Hardy and a few a more general Event cards. All feature comic scenes from the film Beau Hunks and their other films. If you happen to be passing our demo game at the show, expect to be roped in to draw the cards, sing one of the Duo's theme songs or do a little dance! 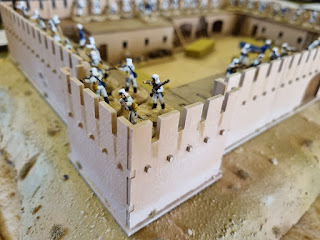 It's not all silly, of course, I have also produced a short leaflet talking about the history of the period, comparing it to the glamorous and romantic image of the Legion portrayed by Hollywood. There will be a small display of pictures maps and other information for anyone wanting to research the period for themselves and there are even a few "test your knowledge panels" to see who knows their movie history and the history of the Legion.

So, back to the practice game.... A big thank you to Ray (of Don't Thow a One fame) for sharing these pictures. I was so busy running things I didn't take any pictures at all! The session on Sunday was really useful because it gave me some much-needed practice umpiring a game with a rowdy (but good-natured) bunch of gamers. It also revealed several small mistakes with the QRS I was using and threw up a useful to-do list of minor changes I want to make for the Demo game itself.

That's it for now, more will be revealed on the day. It goes without saying that we would love it if you could come along and see our efforts at Broadside on the 4th of June at the Medway Park Sports Centre, ME7 1HF.