New Projects and the future

I have recently been quite busy making terrain for my Normandy games (although much of it is generic and could be used for other periods/settings). Over the next few weeks, I'll be sharing some videos showing off some of this work, but right now I am working on a new project. I'm still sticking with Normandy 1944 and Chain of Command, but I'm starting work on some late war British Infantry that I recently bought from Skytrex. If you watch the 'unboxing' video in the link you'll see how nice these 15mm metal figures are, and now that I have started work on them I like them even more.

My eventual aim is to have a couple of different platoons for both sides that can fight alongside each other in a big multiplayer game down the shed-o-war with the Rejects. This is a long way off and I need to prepare well for such a complex undertaking. Not least because I'll need all my umpiring skills to manage four newbie players simultaneously. The hope is that eventually, I will be able to run this game on a much larger table, in effect playing out two games simultaneously side by side but with linked objectives and of course an overall outcome. Maybe I'm slightly crazy, but the idea has got me excited and I have no doubt I'll live to regret it!! 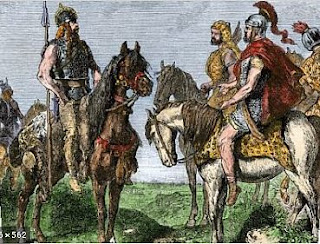 In the meantime, I have a 'New' project to keep me going. The miniatures are hopefully on their way to me right now...a long awaiting delivery of 6mm Celts from Baccus. I didn't purchase a whole army because I already have several bases of Celtic/Gaulish warriors for some of my other armies so all I needed to do was add some commanders, cavalry and chariots and I have the ability to field a Celtic/Gaulish Army against my Romans or Carthaginians. These miniatures have been on order for a long time but I have been happy to wait for their arrival. When they do I'll have the 'fun' task of assembling the Chariots... and after the Indian Chariots I painted a few years ago I know I will need all my patience for that particular task!

On a side note, I'm quite enjoying making the YouTube videos for my channel Miniature Adventures so expect to see more of these in the future. I realise that most of my posts here have been links to these films and judging from the amount of visitor traffic they have generated the combination seems to be popular. Certainly, I feel the two platforms complement each other and my only regret is that I didn't do this years ago.... mind you, it's only the availability of my still relatively new Operations Room that has given me space to make videos and play solo games so maybe now is my time, stop regretting what wasn't possible, and focus on the future.