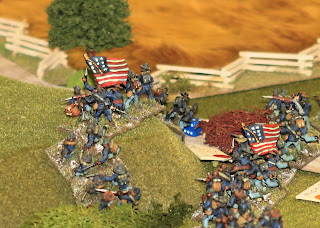 Sunday was unbearably hot inside the shed-o-war, but we persevered because we were playing an excellent ACW game using the Fire and Fury rules. Its been a while since I have played this period or these rules (I think I missed the last game at Reject HQ) so I pulled out my copy of the rules and skimmed through them on Saturday in preparation. Apparently, in that last game, all the players were so frustrated with the way the game played that Postie said he would try to alter some aspects of the rules. So having dutifully read the rules I turn up on Sunday to find that Postie had prepared several changes that made large chunks of the rulebook invalid! So this game was more of a test of some ideas he had that would 'fix' some of the supposedly frustrating elements of the original rules.

The Setup
The game is a fictional battle but set in the midst of a real campaign, so Postie drew up our orders of battle from forces appropriate to the time period and location. Both sides started the game in march column, streaming into the field of battle. We all got a 'free move' before play commenced, based on the roll of 2d6. In keeping with my poor dice rolling tradition, the average score for my Brigades was about 5 and consequently my Division bearly moved! 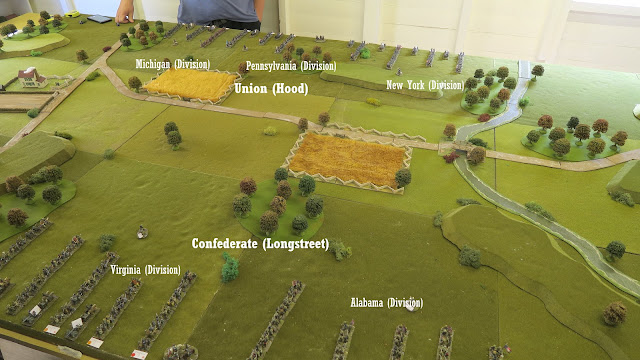 Order of Battle
Errr.... I forgot to copy the OOB's at the end of the game, so you'll probably have to look at Ray's BatRep (when he does it) if you want to know exactly what forces were arrayed against each other. In my defence, it was very VERY hot in the shed-o-war and by the end of the game, all I wanted to do was get outside to gulp down some fresh air.


Analysis
Well, I think it's fair to say that didn't go entirely to plan. I lost two turns early in the game simply trying to get my units into the formation and positions I wanted them. I was able to send a couple of my units to assist Surjit in the centre, but it took us so long to get started it felt like the game was already decided by that point. Over on the right, Surjit was wrong-footed by the excellent move of Rays mounted infantry. I don't think Surj would admit that, but I think we were both taken by surprise by Ray's bold move and I think that's why we both overreacted to the threat. Surj diverted two battalions to the threat of the dismounted infantry on our flank, which I'm convinced Ray had no plans to move once they were in position behind soft cover. That extra battalion could have helped us hold the line against the Union assault on the hill in that sector.

Then when our cavalry finally came on in Turn 4 (waaay too late in the game, but that was the C/O's decision) I don't think Surj handled them very well (sorry mate). I think he was lining them up for a Napoleonic style frontal charge of the Union infantry, but that's just not how cavalry of this period worked and I'm not convinced the rules would have favoured such a move either. Personally (and Ray agreed with me) I think they would have been better used to swing wide behind the Union flank, take a turn or two to get into position and then dismount to become a thorn in their side as his dismounted infantry were in ours. But I wasn't in command of these reserves so it's hard to say what I would have done when faced with such a conundrum. I had my own problems...

So, over on my flank, having spent several turns just trying to roll higher than a 1 on the movement chart (*facepalm*) I was effectively ordered to hold my position and support the centre. I was able to send two Brigades into the centre and one of these was instrumental in holding back a Union breakthrough charge that had destroyed one of the Virginia Brigades. Eventually, Ray brought his troops close enough to my line that I decided to charge his position. Despite supporting the charge with a second Brigade and have the benefit of a 'Dander up' charge, I was unable to beat the union troops because they were lined up behind a fence. We discussed this after the game and I felt the bonuses for standing behind a rail fence were just too high, effectively putting this on par with a fortification.

I had better luck with my Artillery. Indeed we all did with some devastating barrages falling on enemy units. I concentrated my fire on the leading Union brigades in front of my line and although I didn't destroy anything I did significant damage which possibly held back another union advance. We all felt that artillery was a little too powerful for the period and needed to be scaled back a little.

So at the end, we called the game a draw but I felt the Union forces had the upper hand. (Ray will probably say he won, don't belive it!). Postie needs to rethink some of the rule changes he was trying out but I hope to give these adapted rules another try because I have always enjoyed playing the period.
Posted by BigLee at 09:28