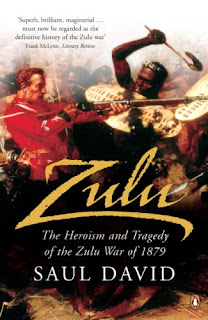 Despite my recent foray into 15mm tanks I am still working away on my Zulu War project (albeit slowly). While I was busy knocking out units for the Painting Challenge I was also avidly reading many of my reference books on the period. One of the most enjoyable was Zulu: Heroism and Tragedy of the Zulu War of 1879 by Saul David. I meant to write up a review at the time but got a little sidetracked so here is a slightly shortened version, late but none the less highly recommended.

The book follows the usual format for these type of works, looking at the history of the region in the years leading up to the war of 1879. This sets the scene for a conflict that shouldn't have happened were it not for the ambition of certain individuals and the failure of a colonial system that inevitably ceded regional governors a lot more independence that the government back home would probably have liked.

Like so many of the books on this short lived war I often found myself lividly wanting to shout at the idiots in charge through the pages. While Saul David writes with professional detachment (as all good historians should) the blinding stupidity of some of the players in this tragedy still leap off the pages. Lord Chelmsford is clearly shown to have been criminally responsible for the tragedy at Isandlwana but there is plenty of blame to go around as various senior officers including Colonels Glyn & Pulleine ignored common sense and military experience in the face of an enemy that was desperate, determined and fighting on their own land.

There is also a lot of evidence relating to the 'cover up' that took place after the disaster which saw the blame shifted to Lt-Colonel Durnford. This included the hiding of evidence, incorrect statements under oath and the exercising of political influence whereby the 'establishment' seemed to close ranks to protect men who did not deserve protection. Many of the myths that still persist about this war owe their origins to this sordid exercise in political machination and this book does it best to debunk those myths once and for all.

Zulu: Heroism and Tragedy of the Zulu War is a scholarly work in the quality of the research presented, much of it new, but it is also a very readable book. I found myself avidly approaching each chapter wondering what would happen next, and even after reading lots of books on this war there was still room for new revelations. I'd always recommend reading a range of books on any period of history to get a rounded view of events and I would definitely recommend adding this book to any reading list related to the Zulu war.