Queen of the Desert - Matilda II 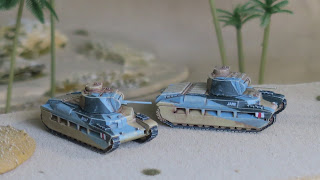 My latest painting project is a pair of Matilda II's, which (when first introduced) were probably one of the best tanks in the British arsenal. Initially designated the A12 the Matilda II was naturally a development of the Matilda I which first saw service in 1938. As seems to be the usual way with tank development the building of a first generation tank inevitably throws up a load of design problems that lead to the second generation on the drawing board almost before the first had even entered service. This was true for the Matilda and by September 1939 the first Mk II's were entering service (only two machines, but with more entering service each month). By the end of its production run over 3000 Matilda II's had been built.

Both Matilda were developed in line with British military thinking at that time which saw the need for three types of tanks; Heavy Tanks; Cruiser Tanks; and Infantry Tanks. The Matilda's were of the latter type which meant they were designed to be heavily armoured but slow moving so they could support the infantry. By the Matilda II a key design specification was that it had to be able to be impervious to the main AT gun at that time, the 37mm. Consequently the armour on the A12 was incredibly thick (up to 78mm on the front) and could wade into battle impervious to almost anything the enemy could throw at it. Indeed early in WWII the 7th RTR attacked the 7th Panzer group near Arras in France and did so much damage - with so little loss to themselves - that panicked shock-waves rippled throughout the German high command. It has been argued that this action contributed towards the German decision to halt the advance towards Dunkirk and bought time for the evacuation. I have also heard it said that Hitlers personal obsessive intervention in tank design (for ever larger tanks with even bigger guns) stemmed, at least in part, from this moment.

The tank may have been slow (top speed was about 15mph) but the Italians found it virtually impossible to disable let alone destroy. Initial Matilda II's were powered by twin diesel AEC 87hp engines although later models retained the double engine configuration but used the more powerful Leyland diesel engines with 95hp each. This double engine sounds complicated but the Matilda II was easy to maintain and run and was generally considered by tank crews to be very reliable.

By 1940 more Matilda II's were entering service and in North Africa the 7th Armoured Division put them to good use against the Italians in Operation Compass. They were able to smash their way into the fortified camps the Italian Army had built after invading Egypt and pretty soon proved themselves superior to anything the Italians could throw at them. The reputation of the Matilda II took a bit of a battering in later years as it was slowly superseded by newer, larger and better armed German vehicles but in 1939/40 it could arguable be described as cutting edge tank design.

My Matilda II's are hard plastic Zvezda models and clip together very easily. I added a dab of glue to strengthen the models and then cleaned them before base coating. I have opted to paint them in the Caunter camouflage scheme although its worth saying that there is some debate about the colour I have used. The IWM and Bovington Matilda's are painted in a Grey/Blue colour scheme but it seems they got the colour wrong and the blue should actually be a light grey. The problem is I like the colour scheme, so I have decided to stick with the colour scheme we are familiar seeing. 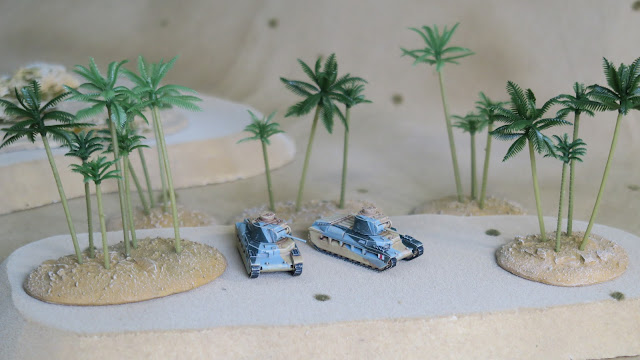 July and August is always a lean period for gaming and painting because of family holidays and a wealth of other commitments like weddings and birthday parties. But for the most part things are settling back to normal and its high time I made an effort to get my painting, gaming and blogging back on track.
Posted by BigLee at 19:03