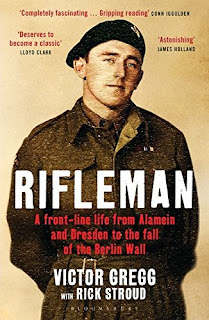 I was recently given this book by my Brother-in-Law and its been a thoroughly gripping read from beginning to end. The books is the life story of an east end lad who joins up and serves through the war in many of the major engagements of North Africa and beyond. In fact his army career was so hard to believe I had to do a little digging to find out if this was a real memoir (it is) or a historical novel.

Victor Gregg was born in 1919 into relative poverty in the east end of London and grew up in the school of hard knocks as part of street gangs of kids, involved in petty crime and living by his wits. This was a normal upbringing for many kids of his generation with poverty and the daily struggle to put food on the table being part of life, even for children. From an early age he was independent, recalcitrant, often outspoken and tough. When the chance to join the army came along in 1937 he was a natural recruit (despite his indifference to authority figures) and soon found himself serving in the Rifles in peacetime India before the war. 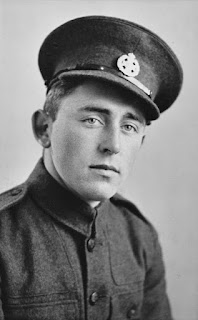 When war with Germany was declared he expected to be shipped back to England but instead his regiment found itself in Egypt facing the growing threat of Italian Fascists in Libya. A long period of training, acclimatisation to the desert and deep patrols 'into the blue' came to an abrupt end with the Italian invasion of Egypt and British preparations for a counterattack. His squad were assigned to a Bren Gun Carrier and so began a long association with motor vehicles which which would ultimately shape his army career. He took part in Operation Compass and saw much heavy fighting culminating in the Battle of Beda Fomm. His description of Italian tanks attempting to break through the British guns should forever dispel the myth that the Italians were cowards that didn't know how to fight.

After a period in South Africa he returned to his old unit and his mates in the Rifles. Then by chance he was picked to be a driver for a little known Belgian officer by the name of Vladimir Peniakoff. Paniakoff was something of a Polyglot, speaking six languages and spent much of the desert war organising the Sennusi Arabs against the Italians in what became known as Popski's Private Army. Victor spent much of his time alone driving across the vastness of the desert behind enemy lines delivering vital supplies to contacts and allied tribes. His work with Peniakoff inevitably lead to contact with the LRDG and eventually he joined them for 18 months. Once again he was employed driving vast distances behind 'enemy' lines, this time ferrying wounded men back to Siwa Oasis. His description of how to thwart enemy air attacks when caught in the open desert is both very informative and tells a lot about the coolness of Gregg under fire.

Eventually he returned to his mates in the Rifles who were now part of the forces defending the narrow strip of desert between the Qatarra Depression and the railway stop at Alamein. His unit were assigned to protecting the engineers that would breach the German minefields in the first phase of Operation Lightfoot, the opening stages of the Second Battle of Alamein. His experience of waiting for it all to start perfectly sums up the lot of the PBI.

His unit were heavily engaged in the fighting at 'Snipe' and once again he experienced the harsh reality of hand to hand fighting, this time against the Germans rather than the Italians. 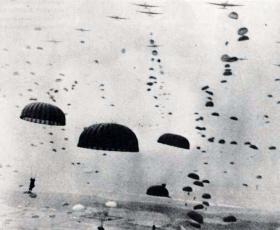 After a period of R+R Gregg transferred to the Parachute Regiment, learning to jump out of perfectly good airplanes with nothing but a silk parachute to break his fall. Many recruits never completed the training when faced with their first jump but Gregg stayed the course and earned his red beret. Transferred back to Blighty he had more training as well as home leave when he reconnected with his sweetheart from before the war and promptly got married. It wasn't long before they were expecting their first child but the war intervened and it would be some time before he would meet his child. The reason was an ambitions operation called Market Garden and his destination would be the Dutch town of Arnhem.

More bloody hand to hand fighting followed in that desperate battle before he became a POW. The war however was certainly not over for Private Gregg. Transferred to a large holding camp he had the opportunity to be assigned to a smaller camp doing non-war work in Germany. He thought (rightly) that the opportunities for escape would be better and leapt on the chance to alleviate his growing boredom. And so began a period working in and around Dresden clearing roads of snow, emptying refuse pits and occasionally working in factories. An abortive escape attempt landed him on punishment duties but on the whole he still thought his treatment was fairer and better than he could have expected. His rebellious nature soon got the better of him when he was involved in sabotage at a Factory that saw the site burn to the ground and him in prison awaiting execution! 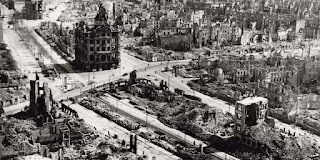 While he waited and contemplated the chain of events that had lead him to this point, fate took a hand in his salvation. Gregg found himself virtually in the centre of the destruction of Dresden by Allied bombing in February 1945. His description of the firestorm that engulfed the city and its inhabitants is one of the most striking episodes in the book. Decades of debate and discussion have struggled to reconcile the war aims and morality of the Allied bombing campaigns in the later half of the war but for Victor Gregg there was no doubt that the firebombing of that city was a war crime. He never forgave the politicians and generals that made the decision to target a civilian population in this way.


"I still occasionally suffer nightmares about those two nights of bombing and the firestorm, people burning in the street, flames reaching down from the heavens like huge claws, sucking up human life as if to satisfy some inexhaustible appetite. I wake up bathed in sweat with the sound of terrible screams ringing in my ears."

In the Chaos of the cities destruction and with the remnants of the Third Reich collapsing in upon itself, Gregg was able to avoid the authorities and somehow found himself on the Russian side of the front lines. He spent time with some front line units and saw the brutality meted out to the German civilian population. He eventually made his way back to England to be demobbed and returned to civilian life. Full employment after the war made it easy for him to change jobs but its hard for a modern reader to understand how anyone with his experiences could ever have adapted back to civi-street.

Victors life after the war ended up being almost as colourful as his military service. For a period he was a keen cyclist and a contender for the Empire Games in New Zealand . He was alternatively a Lorry Driver and a Chauffeur, joined the Trades Union movement and the Communist Party although his distrust of those in power (including the Soviet leadership) meant he was immune to much of the propaganda that he was exposed to. Despite this he was employed by a Russian Bank and Trade Embassy, ferrying potential intelligence operatives around the country and running shady errands, and all the while working 'unofficially' for MI6! In later life he became a keen motorcyclist and his Russian connections made it easy for him to cross the Iron Curtain to attend Motorcycle Rally's. This time the shady errands were for British Intelligence but he also nurtured contacts in the Hungarian democratic movement and in 1989 (aged 70) found himself present when the frontier wire was cut in Hungary just weeks before the Berlin Wall fell.

My overwhelming impression of Victor Gregg after reading this book is that if you had to serve in the army in wartime he would be the best mate in the world to have with all the best characteristics of loyalty, courage and comradeship. But being Victors mate was also probably the most dangerous position to be in as it seems everyone around him got picked off as the war went on, leaving Victor somehow unscathed and ready for the next adventure. But while its true he suffered no major physical injuries during his service it is clear from his words that the psychological scars of his experience stayed with him long after the guns fell silent. His wartime experiences never left him and ultimately resulted in the breakdown of his marriage. In later life he began to write down his memoirs and what comes across most in his words is his optimism and upbeat attitude to life.

"I believe that when things are getting rough, take a breather and brew up the tea - it'll all come out in the wash"

Considering the things he has seen this is probably the most amazing thing about his story and makes this one of the best memoirs I have read in a long time.