Battle of the Coille 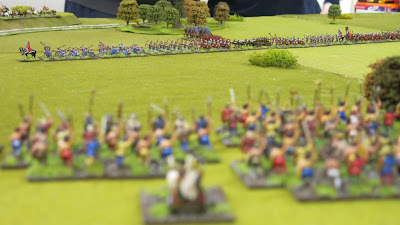 The Roman Column is trudging towards the position of its evening camp, unaware that it is walking into a British trap. Over the weekend Postie put on an excellent 15mm game using his own ancients rule set "Let the Gods Decide". Five members of the Rejects took part and over the course of six and a half hours we decided the fate the Roman occupation of Britain.

The Setup
A Roman column is marching through rolling hills and isolated forests towards the site of its evening camp. The commanding General has sent out cavalry scouts but they have reported back that the countryside is devoid of any hostile Britons (Ray rolled poorly!) . Unfortunately for the Romans the opposite is the truth and not only are the surrounding hills swarming with fierce warbands but they have been able to sneak even closer to the head of the Roman column than they could have hoped. The trap is sprung and to the Roman commander it seems as if the Celts have burst from the ground just a few hundred yards away.

Once again I am impressed by the simplicity and versatility of Posties home made rules. We have played "Let the Gods Decide" before and we always seems to have a good game with these rules. In this game we were able to see distinct differences in style between the opposing forces. The Britons had no choice but to keep close together as any unit that fell outside command range was effectively out of the game. I had one unit of Javelin troops that fell behind after the first turn and never moved after that. Meanwhile the Roman troops had more officers, better discipline and were able to perform more complex manoeuvres, even when being charged by the enemy.

The main advantage for the Romans though has to be the effect discipline has on melee and their to-hit rolls. Despite being overwhelmed by Britons the Romans won the majority of melee's because they were hitting on a 4,5,6 in addition to devastating volleys of Pilum when charged.

Despite these advantages the Romans lost the game, and a lot of that has to come down to that poor scouting roll before the game started. That meant the British players had a free move, reducing the time the Romans had to redeploy their forces. And extra turn to retreat and redeploy may well have made all the difference to the Romans. Having said that I didn't feel that the Auxiliary units retreated far enough, or fast enough, to form a strongly defended line against the oncoming Britons. This gave the British players room to pick away at exposed units and break up the formation. Also the Legionary Cohorts at the rear of their column probably should have tightened up their formation, denying the Britons a change to extract casualties with their chariots and Javelinmen.

A good game, an excellent set of rules and my second win of the year!
Posted by BigLee at 17:22