My Desert Raiders project has finally taken another step forward with the completion of some aircraft from the Règia Aeronautica (The Italian Air Force). I won't be using these as playing pieces but rather as terrain - parked aircraft - for raids by the SAS and LRDG. They have still taken a lot of work to complete but are not as fully detailed on the underside as I would have done had they been mounted on flying bases. 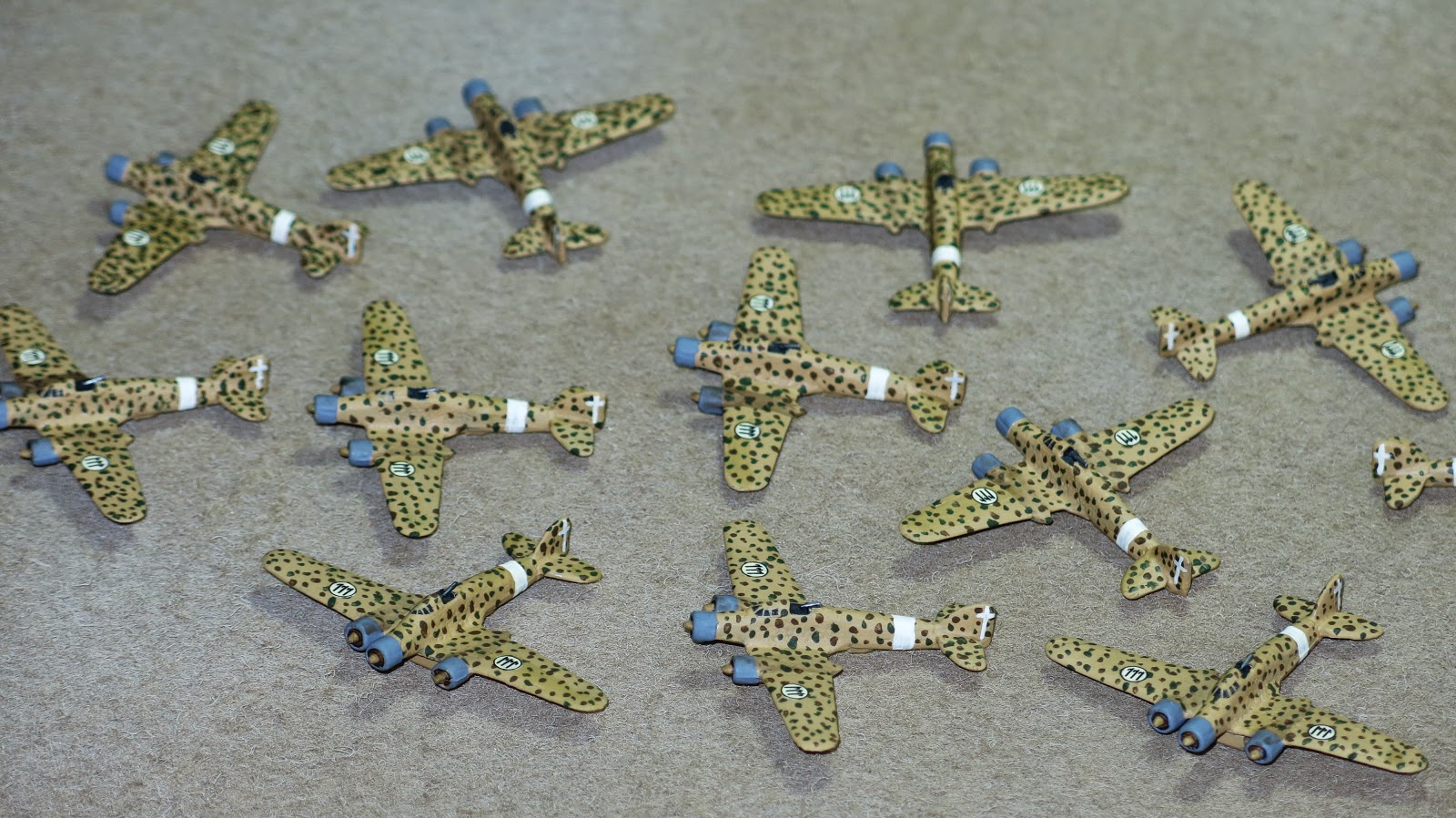 The models don't come with undercarriage but because they represent parked aircraft rather than flying ones I wanted to raise them up just a little bit, so they didn't lay flat on the ground. I toyed with several ideas (each more elaborate than the last) before settling on a simple wooden block consisting of a 1 cm length of wooden chopstick (I knew these would come in handy one day!) glued to the underside of the models. The block isn't really visible when the plane is on the table and the model now looks like it is sitting on its undercarriage rather than slumped on the ground. 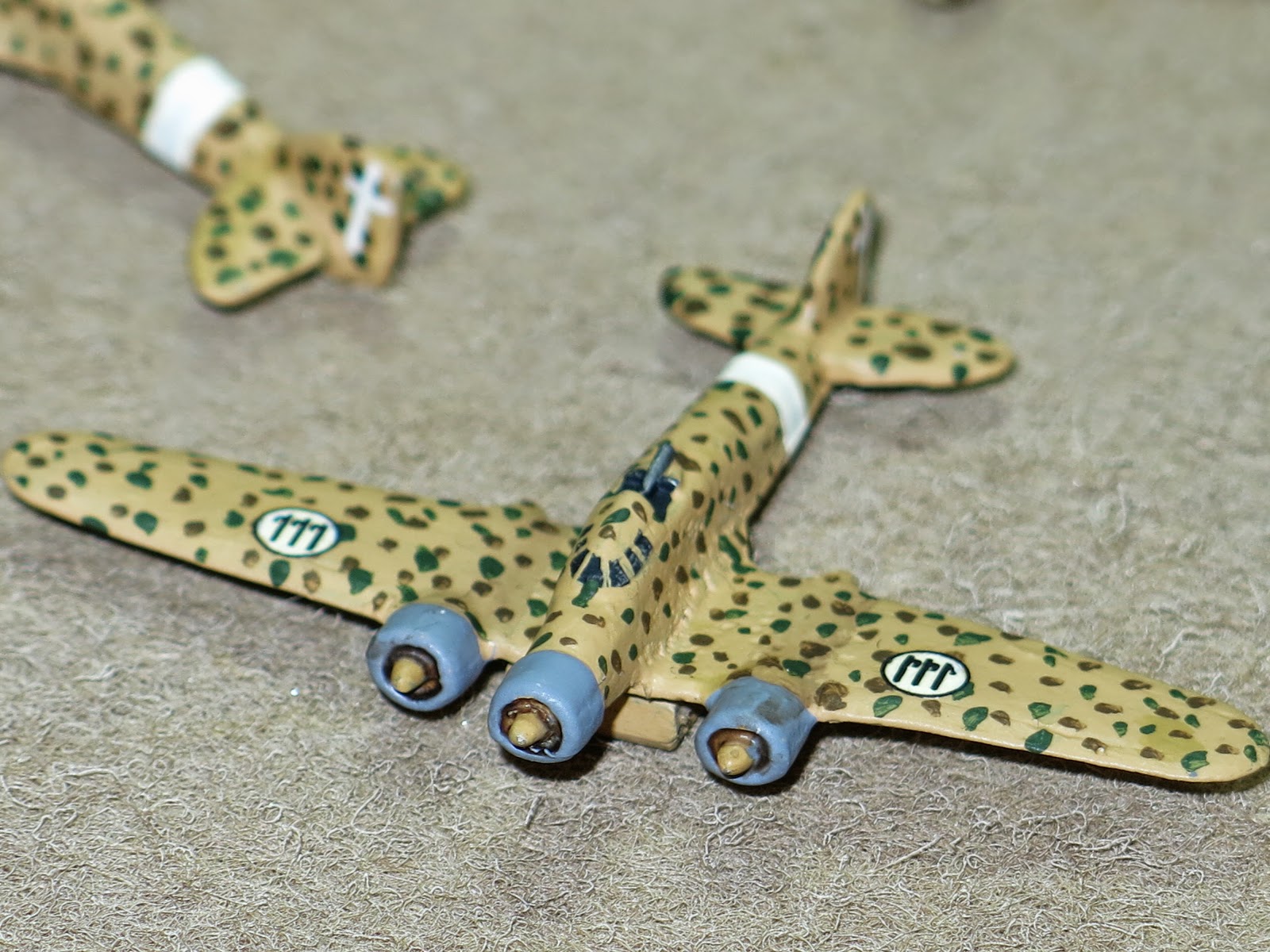 The colour scheme is my best approximation of the camouflage they might have had in late 1942 in Africa. To be honest there are so many examples on-line and in books it was hard to pick a definitive pattern for them. I'm not an expert (and I'm sure one will pop out of the woodwork as soon as I post these pictures) but there seems to have been a lot of variation between squadrons so identifying the 'correct' pattern was pretty much impossible. I have used a base colouring of Tan Yellow (Vallejo 912) with a mottled camouflage pattern of German Camo Brown (826) and Luftwaffe Camo Green (823). The 'white' band and tail cross were painted freehand with Ivory (918) as I felt the White was just too bright. 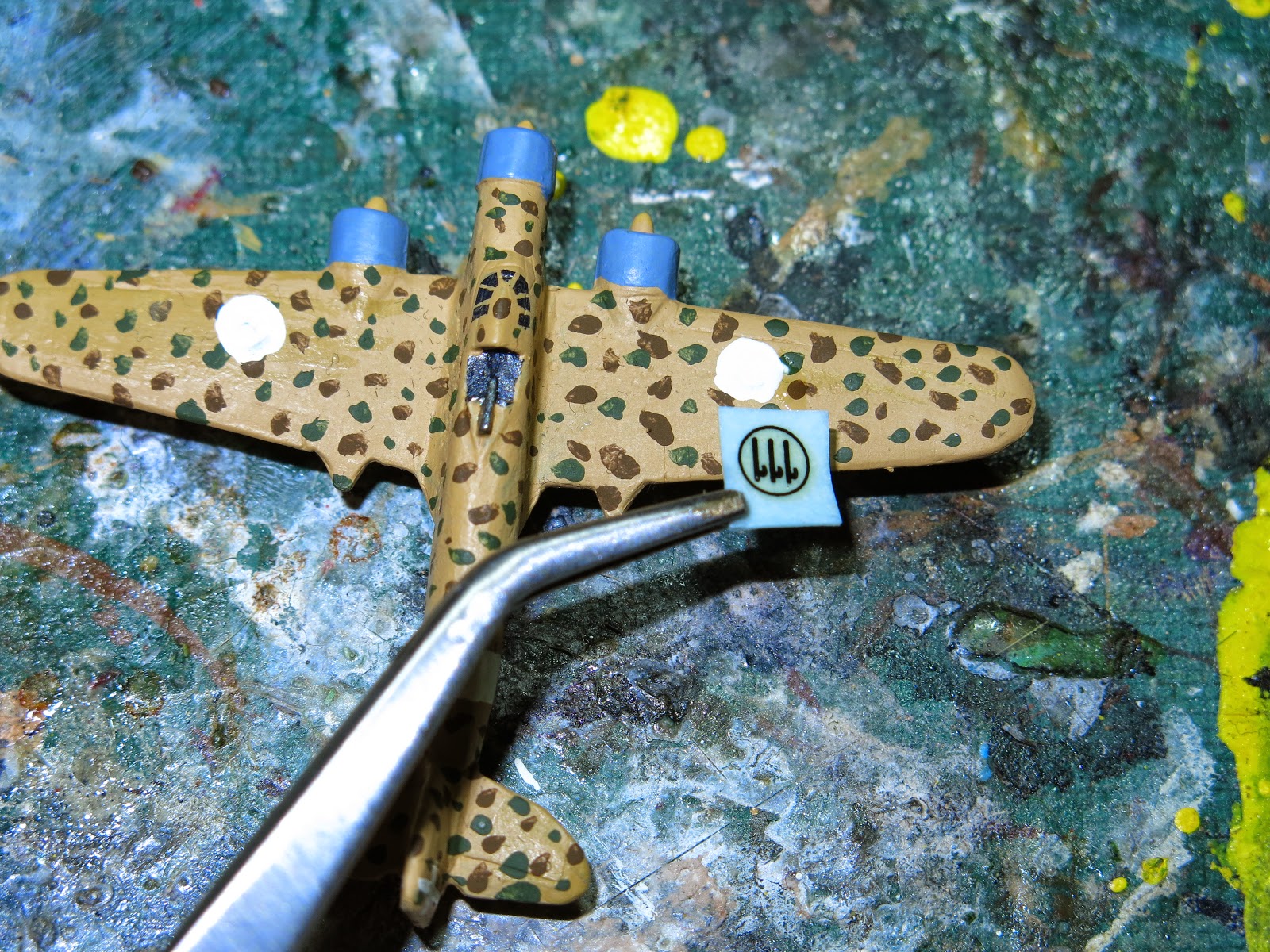 The wing decals are by Trafalgar Models and come from their WWII 1/300 scale transfer range (manufactured by Veni Vidi Vici). Unfortunately half of the decals I bought were transparent so I had to paint fairly precise circles on the wings to match the circular Fasces symbol of the Règia Aeronautica. The ivory background to the transfers looks really good but by god was it hard to get right. You need a very steady hand and good eyesight to pull this off! Having said that I'm really happy with how these have turned out. I found the transfers hard to get off the backing paper but after switching to a warm water soak they went onto the model really well.

As usual I finished these with several coats of GW Purity Seal satin varnish and a final layer of Testors Dullcoat. Now I have a batch of Italian fighters to paint up and I'll have a good number to disperse around my Axis airfield.
Posted by BigLee at 14:44