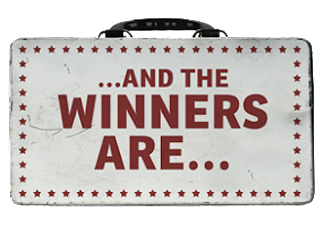 First let me start by saying a huge thank you to everyone that threw their hat in the ring and took part in this giveaway. The response has far exceeded my expectations and the feedback from entrants has left me with a warm fuzzy feeling! I've now processed all the entries (basic and bonus) into one big list and dropped that into the List Randomiser on the website random.org.

So without further ado, the three winners are... 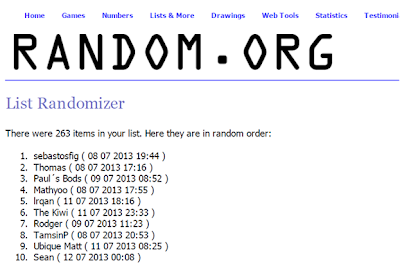 Congratulations to the three winners and commiserations to the runners up. Can the winners email me (BigLeeH at gmail dot com) with their contact details (Email and full Postal Address) to confirm which prize you want. The 1st place winner gets first choice and so on, but hopefully there's enough choice that everyone will get what they wanted.

Update: Here are some stat's... There were 263 entries in total, 155 of which were bonus entries from links on other sites. The competition was 'pimped' 31 times on other blogs, generated over 19,000 pageviews and BLMA's New Model Army was increased by 11 new Followers (welcome BTW).

Update: Sebastosfig and Thomas have chosen their prizes (Perry Pilgrims and the WWII stuff respectively). I've managed to sneak a few extra items in each parcel and I'll get them in the post in the next few days. Congratulations to you both and I hope you enjoy your Loot! Just waiting now for Paul to pick his prize, still some good stuff to be had!

Update: Paul has chosen the Knights and Fantasy painting guides so that wraps up the draw. All I need to do now is get to the Post Office and send out the prizes. Thanks again to everyone that took part and contributed to the success of the competition.
Posted by BigLee at 12:37