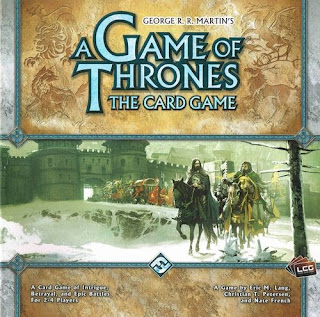 Last Friday three of the Dagenham Delvers gathered for another game, only this time we settled on something a little more complicated and interesting than some of the board games we have played in recent months. Dave brought along the Game of Thrones Game by which is sort of a collectible card game but based around fixed card expansion sets. This still allows for customization of decks but without the bottomless expense associated with the blind buy random booster packs that made older Trading Card Games such an expensive habit.

As a point of terminology it may be worth quickly explaining the concept of the Customizable Card Game (CCG) to those who may not be familiar with it. There are several terms used by different systems that fall within this group of games. The original concept was the Trading Card Game or Collectible Card Game whereby players bought a core deck and expanded it with randomized expansion packs (such as Magic:The Gathering). Fantasy Flight Games describe Game of Thrones as a Living Card Game because they have removed the random element from the model but retained the idea of expansion packs. Regardless of the method for expanding sets the core concept remains the same with players creating a unique a deck built taken from a pool of cards available to them. The idea is that multiple players can participate in a game each with unique decks that fit the theme of their chosen faction.

This CCG lets players build their decks to represent the competing Houses of Westeros and every card has some meaning or significance within this detailed world and its history. Although the rules (and the rulebook) seem intimidating at first glance we got to grips with them pretty well after just one game. As with all games like this most of the information you need is on the cards and the real learning curve comes from understanding the various symbols and keywords on them. Once you have these mastered the game is fairly self explanatory.

The objective of the game is to acquire 15 power tokens though a combination of Military, Intrigue or Power Attacks. These enable players to accumulate power in temporary alliances, acts of treachery and  careful planning, all of which can be thwarted on the turn of a card or at the hands of equally scheming opponents. One of the elements that I liked was the fact that Characters in play can be used to attack or defend (at which point the character 'Kneels') but once used they cannot be reused until the next turn. So if you use a powerful character to defend yourself you cannot then use them to launch an attack unless you have a card that allows that character to stand up ('untapp' to use the technical term). 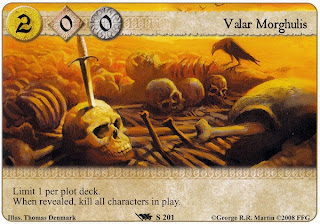 The other gameplay mechanic that I thought was very good was the use of 7 Plot Cards. These are drawn at the start of the turn, each can only be used once and they can drastically change the way that the following turn is played. Each plot card has three attributes which determine initiative, how much money you have to spend each turn and the strength of your attacks that turn. Each plot card also includes a special ability which can have a drastic effect on the game, for example "Kill all Characters in Play" which is a b**tard of a card and scuppered my chances of victory in the game we played.

In theory this game could be played with two players but its clearly better balanced for three or four players. The rule book suggests the game can be played in about 30 minutes but we managed to string our game out for two hours. That was almost certainly down to the fact we were learning the rules and I expect future games will be much quicker.

Now for a confession. When I first played this game I had neither read the books or seen the HBO series (although I have now started watching Season 1) while some of the other players had. But from a game-play point of view didn't make a lot of difference whether I'd read the books or not although obviously some knowledge of the books or TV series would have enhanced my enjoyment the game. Having said that I still had a good time and was challenged by the complexity and intricacy of the game mechanics. Despite my lack of background knowledge I came to within a whisker of winning this first game and I'm looking forward to playing it again - only next time with maybe a little more understanding of the setting.
Posted by BigLee at 06:42