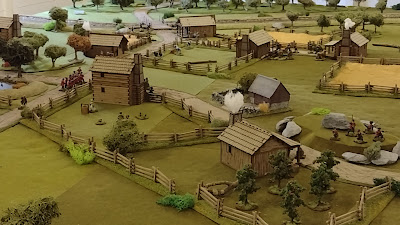 Once again I'm a bit late in reporting on this (covid-in-da-house) but now that I'm feeling a little better it's time to get this Battle Report written up. So a couple of weeks ago the Rejects gathered for a game in the Shed-o-War and this time El Capitano Postie was our umpire. His French Indian Wars rules are simple, fast to play and fun so when he runs a 'Skirmish' game it is usually on a massive scale. True to form this game used the whole of the 6ft by 12ft table and hosted five players fighting it out through a frontier town c.1757. Ray posted his battle report last week and it's worth checking it out here.

The British forces are a mix of Regulars, Light Infantry, provincials and civilians. They are dispersed across much of the table with the Line troops concentrated around the construction site for a new fort. They also have a unit of friendly Indians hiding in nearby woods. The French have a mixed force with Marines, Militia,  Coureur de Bois and a sizable Indian contingent.

The British players (Myself, Ray and Mark) start the game not knowing where the French may attack from, and based on previous games, fully expecting to have to defend at various points around the table edge. I don't know if Stuart gave the French players (Steve & Surjit) much choice in deployment but they decided to attack with everything from one direction. The British had to wait a couple of turns to be absolutely sure that this was the only attack, before drawing reserves away from the other roads and this delay proved crucial for the outcome of the game.

An excellent game, with some beautiful terrain and figures from Posties collection. As a British player, I was of course hoping for a different result, but the points at the end showed this as a clear win for the French, not least because they won the Initiative in all but one turn of the game.